It rained hard almost all night but we woke up to sunny skies this morning.  More thunder showers are forecast for this evening and tonight. Does any of this sound familiar?

We got some pictures of the old buildings in Wapakoneta yesterday. The oldest I saw was dated 1881. The buildings are all in the downtown business area. 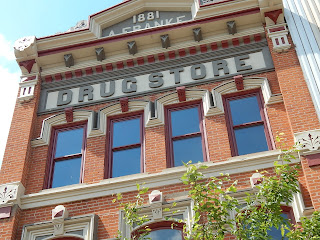 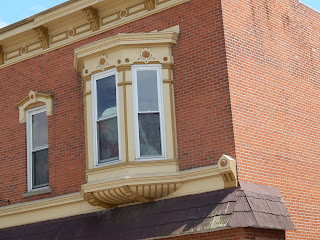 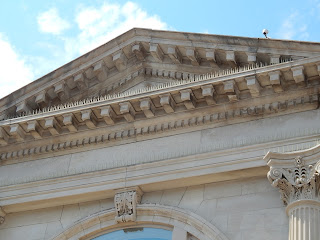 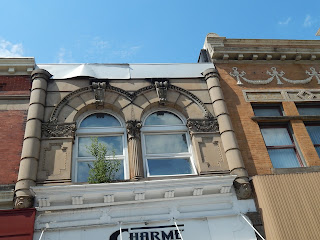 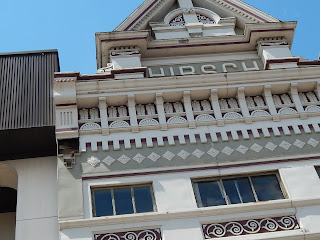 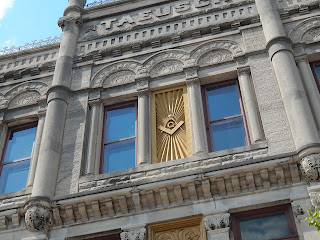 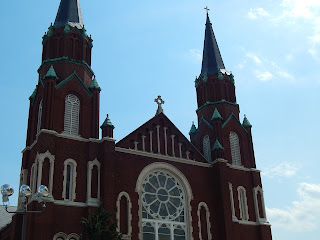 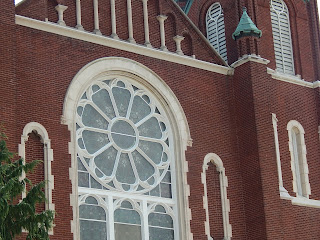 The county court house is an impressive building that is on the National Historic Register.
The current courthouse was constructed from 1893 to 1894 by the architectural firm Kremer & Hart. The building is built with local stone and has a rusticated base with smooth stone from the second floor up. The first floor has square windows in groups of three and blends into the second floor.
The second floor is the main floor and is illuminated by large rectangular windows. The entrance is a projection on the eastern facade and is reached by a flight of stairs, three large arches support a balcony above. The balcony contains four Corinthian columns supporting the gabled roof above. The other entrances are also reached by a flight of stairs to a covered porch with supportive Corinthian columns and a balcony with a balustrade. A frieze separates the second floor from the third. Large arched windows light the third floor with a decorative frieze beneath the roof.
The roof rises at various points to support a square drum with a central octagonal tower with a balustrade surrounding the base. Large arched windows are surrounded by Corinthian pilasters that support a decorative frieze and a four-face clock facing the cardinal points. The tower is capped by a dome with a central spire.

The tower was once graced with a statue of Justice overlooking the main entrance to the east. The community of St. Marys found this offensive, as they had the back of Justice to them and raised money to have her turned to the north. The statue was slowly deteriorating to a point where it had to be removed due to safety reasons. The only parts salvaged from the original Justice were the head, right hand, and sword. 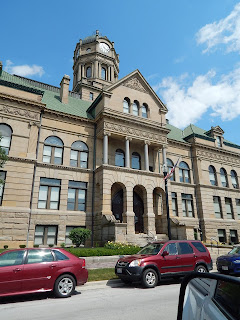 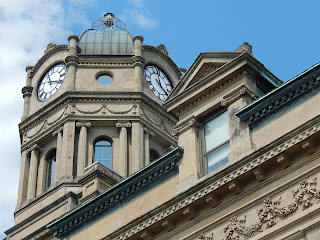 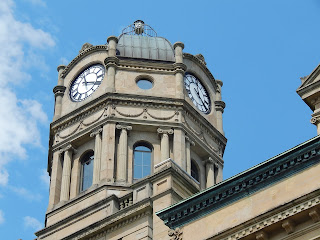 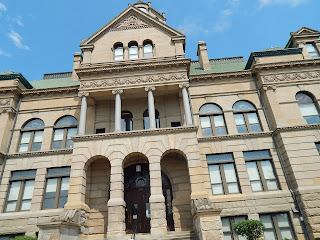 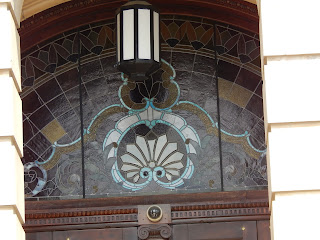 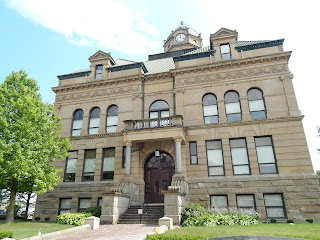 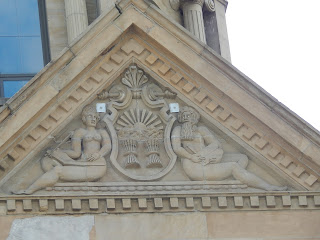 In 1994, in time for the centennial of the courthouse, the Auglaize County Historical Society raised money to restore the statue through a project called "Copper Pennies for a Copper Lady" which raised over $25,000. The statue now stands in the Great Hall facing north, holding a sword in her right hand and the balances of justice in her left. The base of the pedestal contains a time capsule to be opened in 2094, one item being the names of the donors for the restoration of the statue.

We moved about 10 miles: from Arrowhead Lake to EZ Campground and Diner near St Marys. This Campground doesn’t have much in the way of amenities but we will only be here tonight then we go to near Circleville, Ohio which is near Columbus.

Thanks for visiting.
Posted by Ray and Cindy Warner at 2:19 PM