We Took My Shadow To Gardner Mill

The day was kind of rainy but we still went to our yard sales. This time we took the two boys but they weren’t able to find anything.

After we got through we took Taylor (my little shadow) to Gardner Mill, an old historical site that is now shops. They go all out for Halloween with witches everywhere. Skyler decided he didn’t want to go. 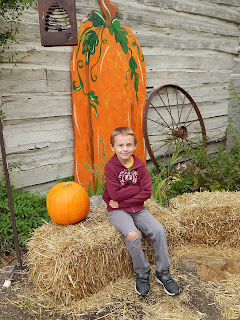 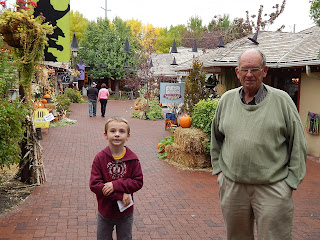 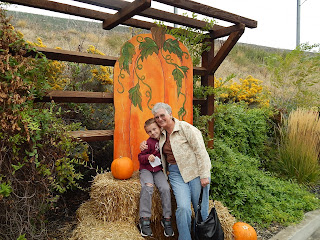 There is a scavenger hunt for the kids to find 15 different witches and as a prize they get to buy a very large cookie for 50 cents. We walked around the shops and finally found all the different witches. 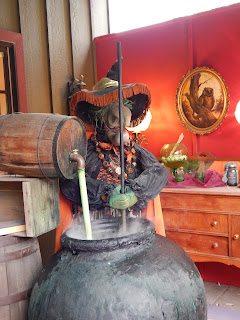 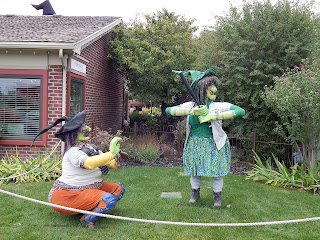 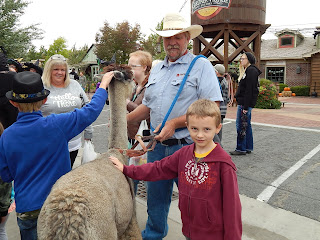 Taylor got to pet an Alpaca. 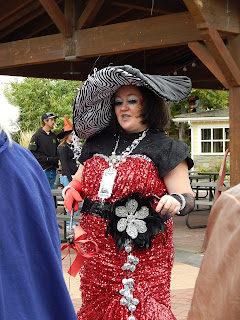 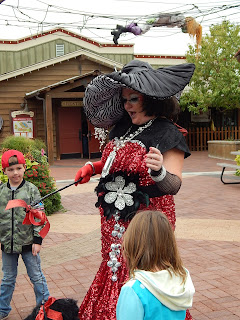 After we got home we loaded the car getting ready to go to Yuma. Cindy was sure we wouldn’t get everything in, but we finally did. We joke about looking like the Beverly Hillbillies because we are so loaded. I wonder why we seem to take so much stuff down with us?

The only things left for us to do before we leave are Penny’s shot and renew the registration on the truck and fifth wheel which have to wait until October. The registrations aren’t due until December but since we won’t be here, they will let you get the emission and safety inspection done two months early. I called to see if it could be done in September, but technically it must not be longer than 2 months from the due date, which is December 31, so September does not work while October 1 does.

We plan on leaving early Tuesday morning and drive straight to Yuma. Since we are in the car, the 700 mile drive, although long, isn’t too bad when we trade off driving.  This year I don’t have to work on the water heater like I had to last year so we should be ok.

Thanks for visiting.
Posted by Ray and Cindy Warner at 3:25 PM 3 comments:

The last few days have been very pleasant and a lot cooler than it has been. August and the first part of September were setting records almost daily.

We have been busy with more tomatoes and Cindy wanted more mulch for her flower beds, which we finally got taken care of Saturday.

One of our neighbors had a large crop of tomatoes and cantaloupe of which he told us to take what we wanted. Cindy even tried fried green tomatoes which weren't too bad.

I'm almost through quilting the quilts Cindy wanted to take with her to Yuma. I try to remember to get some pictures of them on a future post.

I need to get our truck and trailer licenses renewed in the first of October and Penny needs to get one shot before we leave.

I would like to leave now, but it is still a little warm in Yuma, so we will wait until the first part of October to head south for the winter.

Jana Clark mentioned freezing you credit with the three reporting agencies so I thought it probably was a good idea so I went on line to take care of it. The first two went pretty smoothly but TransUnion asked a lot of questions trying to make sure I was who I said I was. For instance what year my Chev suburban was. The only problem is I haven't owned a Chev suburban for at least 10 years. And what year my Subaru was. The last time I owned a Subaru was probably in 1989. Anyway to make a long story short they sent me a notification that I would have to call them.

I called this morning expecting to talk to a real person but instead the phone service took over and asked a few very basic questions, zip code, house numbers, and so on. I was finished in less than 5 minutes, while I was on the computer for about 30 minutes and then got turned down. Go figure.

All thing considered, it probably is a good idea to freeze the credit based on Equifax getting hacked.
We really don't have to have it checked very often and it seems to be easy to take the freeze off for a while if needed.

We both have been really busy while we've been home and I'm looking forward to getting to Yuma so I don't have to work quite so hard.

The weather has been setting records for September almost every day. In Ogden, which is about 30 miles north of Salt Lake, A fire started yesterday morning which burned at least 6 homes and forced evacuation of several thousand people. Along with all the other fires burning in Utah and Idaho the air quality here has been really bad.

Normally when we look toward the mountains we have a nice clear view. This picture will give some idea of how much smoke is in the air.
I have been working of quilts and every time Taylor is home he wants to help. Lots of the time he sits on my lap wanting to cut the thread. He also likes to wind bobbins which does help but I have to tell him how many or her would have too many of whatever color we are using at the time. 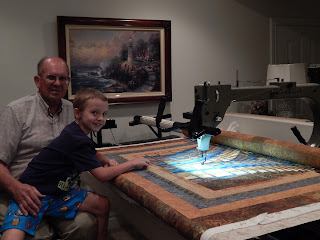 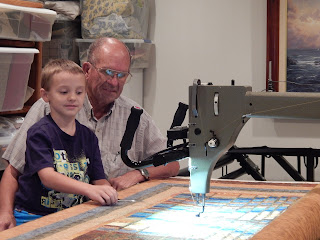 Cindy had one of our neighbors give us lots of tomatoes, so she and Heather have been busy bottling them. They probably got close to 40 bottles plus some Cindy froze to take with us to Yuma.
This afternoon she had me cut some dead branches from the fruit trees and cut a large limb off the apple tree that was pushing against our back fence. She was afraid that if it got any bigger it would break the vinyl fence.

We are only about 4 weeks till we leave for Yuma. I can't wait so I don't have to work quite so hard.

When we are home we always find lots to do.

We did get a new lawn mower. It has electric start so I won't hurt myself pulling on the starting rope. LOL The old one was over 25 years old and I guess it was time to replace it.

We are still having record breaking heat in Salt Lake Valley. In addition the air quality is very poor because of all the fires.

Last Friday was Skyler’s birthday. He turned 12. We had a little party for him and had cake. He got some presents he liked. 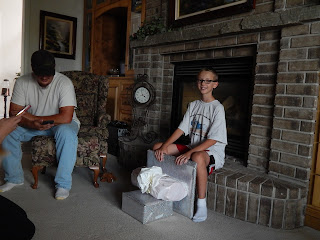 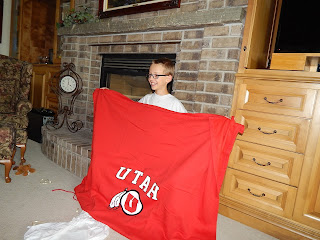 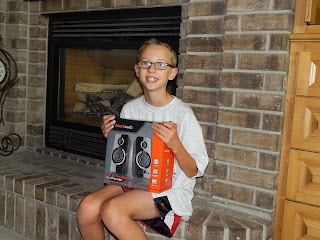 We had my grandkids that live in Idaho come and visit us for a little while yesterday. We haven’t seen them for a while and they sure are growing. My son couldn’t make it because he had to stay and do some kind of work. 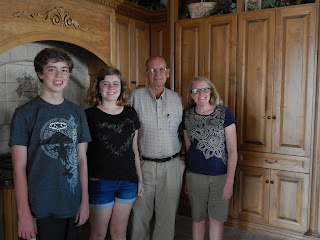 Of course, my little shadow, Taylor had to get in one of the pictures. Whenever he is home and I’m doing my quilting, he wants to help. Sometimes he just slows me down but he thinks he’s helping. I can’t say too much to him because I don’t want him to feel bad. He is 7 and will soon be 8.

I finally got in the mood to finish up Cindy’s giant Christmas quilt. She finished sewing it together in 2013 and I worked on it for a while that winter. It is square and is so large that I had to take my machine apart to quilt the outsides. It took almost a whole week to finally get it quilted. Now all that’s left is the binding which is Cindy’s part. I think she started doing the embroidery on it in 2010. It had been a long project. 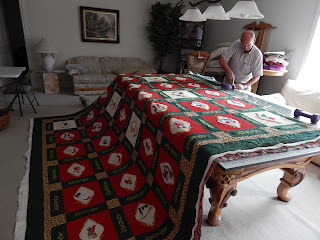 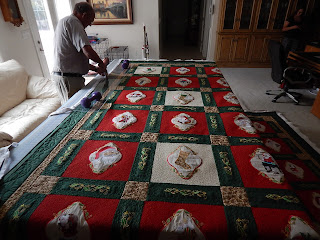 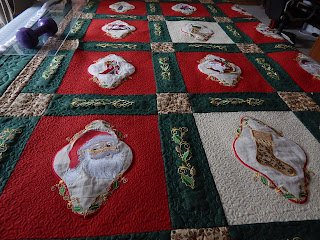 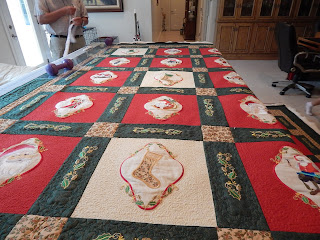 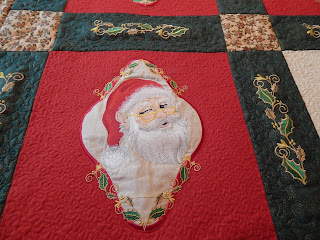 I got the stitches out of my hand today and the Dr seemed to think everything looked OK. It still hurts when I bump it but it is feeling a lot better than when I cut it open.

We are still staying busy.

Thanks for visiting.
Posted by Ray and Cindy Warner at 7:27 PM 4 comments: