The weather guessers are predicting warmer than usual temperatures for at least the next week. What else is new? It sure has been a hot summer.

Cindy is finally get a few tomatoes. That and a lot of zucchini and quite a few cucumbers. We have been eating quite a lot of fresh produce.

Last night we went to a neighborhood party. I'm afraid I was so busy eating and visiting, that I forgot to get any pictures. There were a lot of people there with lots of good food to eat. One of the neighbors had a train made from plastic water barrels pulled by a four wheeler. The kids had a good time riding all over the neighborhood it in.

I did get some pictures of some more quilts I finished this last week. 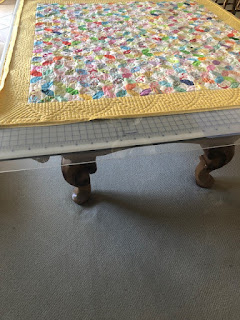 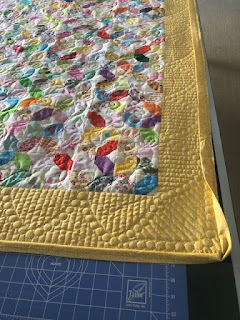 The next picture is of the back, which shows the quilting better. 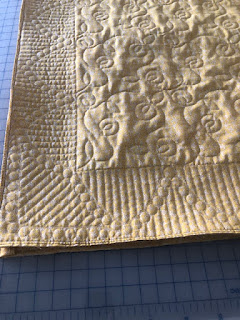 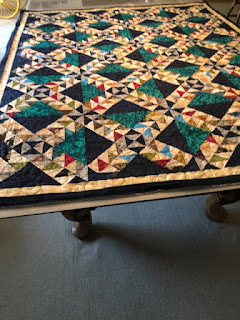 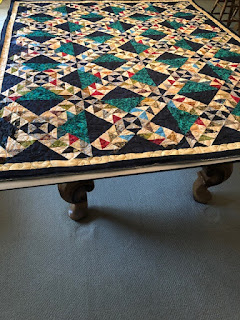 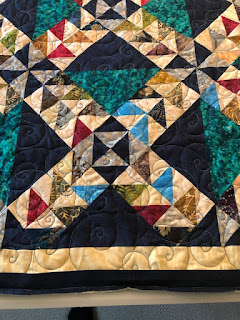 Yesterday was cloudy all day and at about 4:30 it poured lots of rain for a little while. At least it was enough that Cindy's garden and the grass didn't need watering today. Today has been a nice sun shinny day.

I got finished with my driveway caulk job in front of the back garage. Now all the driveways are finished and hopefully we won't get anymore ice damage this winter.

Penny got a hair cut and ever since, she has been giving me a bad case of canine paralysis. I guess cutting off all her hair has made her cold, and sitting on me or by me keeps her warm. 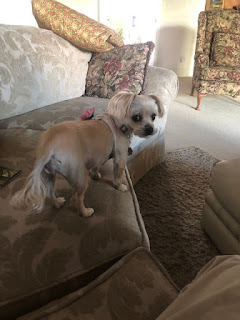 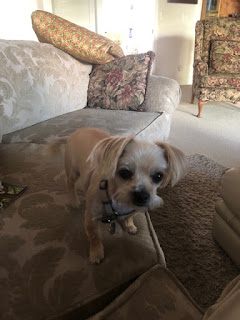 Her she is, in her favorite spot. 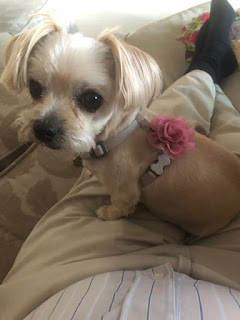 Lately Cindy has been testing red fabrics to make sure they are color fast. Surprisingly, some of the name brand fabrics are bleeding red when she wets them. One batch took several washings to get it not to bleed. The reason she is testing so much is she is making lots of red scrappy quilts.
I'm mostly finish getting the damage the scammers caused straightened out. At least I got my new credit card. I still am running into automatic payments that need to be upgraded.

And finally, another finished quilt. I have no idea how many pieces, but there are a lot. 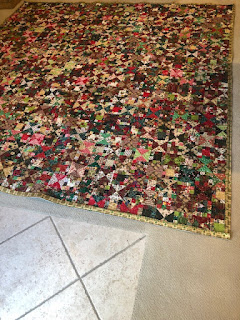 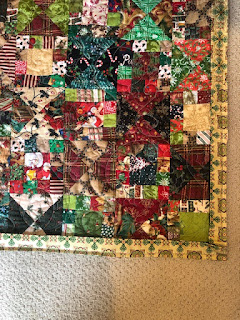 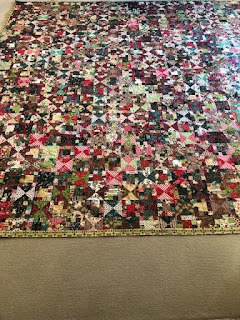 This one is a large king size quilt.

Working On The Driveway and More Quilts

We finally got some rain, not a lot but enough to cool things off. It has been cloudy all week and is supposed to continue next week.

I finally got everything straightened out from the scammer problems. Hopefully they leave me alone, but I wouldn't bet on it.

I spent quite a bit of time working on the driveway down the side of our home. Half of it settled toward the fence on the whole side, which lifted up the middle. I had put some epoxy in it a few years ago, and it settled further which meant I had to grind the joint (all 100 feet of it). It goes the length of the home and the covered patio. This time I used a type of caulk that is supposed to stay flexible. While it was still sticky, I put sand on it so it doesn't look like grey caulk. It was a lot of work. 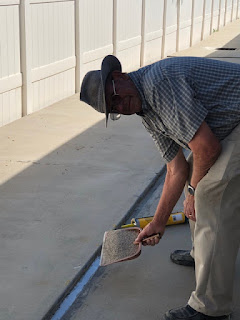 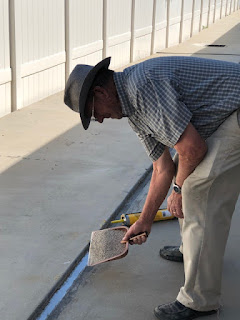 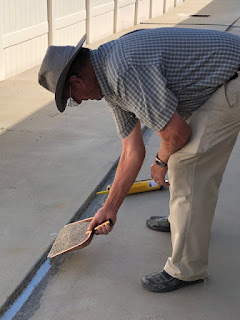 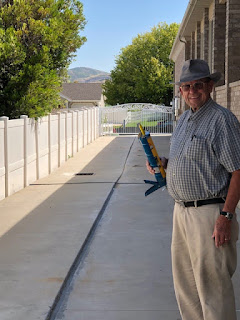 We think better and now it looks a lot better and winter's ice and water can't get into the joint to further break the concrete.

It looks so good, that I decided to seal all the joints in the driveway in front of the garage doors. The joints here had spread enough, that we were afraid of winter's ice here also. Next week, I'll work on the concrete in front of the back garage. It seems like there is always something to fix.

In between all of this I managed to get two quilts done for Cindy. One of them she had pieced before, but this time in different colors. 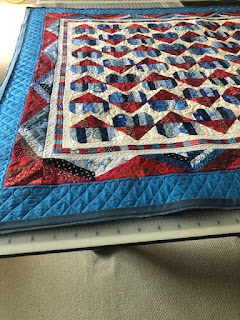 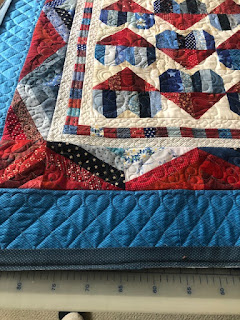 This one took a while in between working on the driveway. All the different heart patterns on the borders took a bit of time. 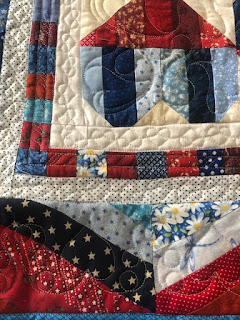 This ghost quilt took me a lot less time to quilt than it took Cindy to sew. 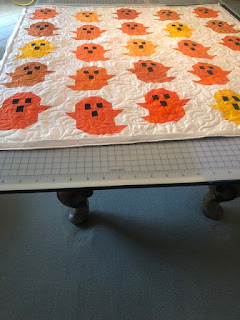 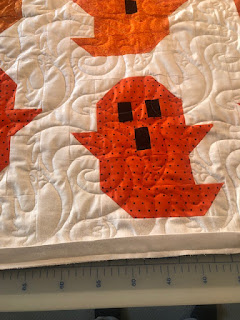 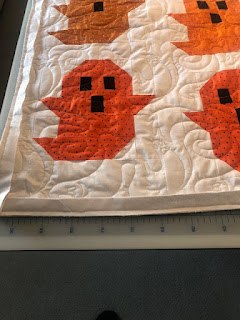 I was able to do an overall pattern on it and It only took a few hours to quilt.

The Scammers Are Alive And At It

We finally got some rain and a little cooler weather for a few days.

A week ago I got woke up by a text from my credit card company asking if a charge to my Visa was legitimate. Had I charged a tv at Sam's Club at 4:00 EDT. Of course I texted back no. They then told me to check all charges and when I checked the card there were four charges at Sam's Club to be delivered to somewhere in Florida. I got on the phone to my card company to report the four fraudulent charges. I also called Sam's Club to report the charges. They told me they were only able to stop 2 of the charges. When I checked the shipping address, it had somewhere in Florida with Riverton, Utah at the bottom. When I checked the tracking for the tv and 45 pairs of pool slippers, the shipments made it to Salt Lake City. Fed EX said they had corrected the address, to mine, but they got stalled, where they have been for a week. Maybe Sam's Club did get them stopped.

Mean while my credit card got cancelled, meaning all my recurring charges to the card had to be changed to Cindy's card. I finally got my new card today. Yes, the Credit card Company reversed the charges.

In between all of this someone changed my password at Sam's Club. I changed it back to one of my own only to have them change it again. I finally put Cindy's email on the account and cancelled any credit card at Sam's, so they no longer have a card on file. Then the scammers did the same thing to my Verizon account, so again I put Cindy's email account on Verizon.

Now if this wasn't enough hassle, in the last two weeks I got letters from three different banks telling me that the credit card I had applied for was declined. According to the letter my credit rating is quite high but they couldn't give me a card. The only problem with all of this, which had my name and address right, was that I hadn't applied for any of the credit cards. I checked with America One Bank at a branch near us and the letter was legitimate, but whoever had applied had a birthday in 1973 and the wrong last 4 numbers of social security number. I expect that might be the reason they were declined, along with I have credit locks on my credit reports at the reporting agency's. Sometimes I wish my birthday was in 1973, but I'm a "little" older that that.

This will date me, but I remember when hamburgers sold for a quarter and sometimes they had a special for 15 cents. I like to tell my kids that I'm so old, that when I was a kid, the Dead Sea was still sick.

Now one more quilt, this one is a Sunflower panel with blocks around it. I used a lot of different Sunflower patterns on the quilt (one border is Daisy's). 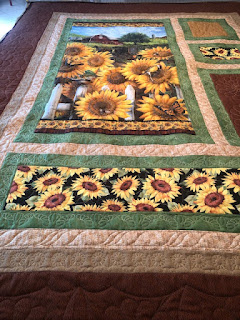 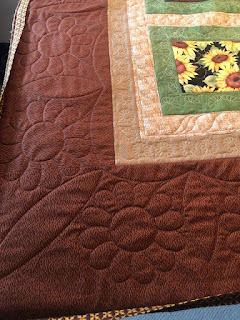 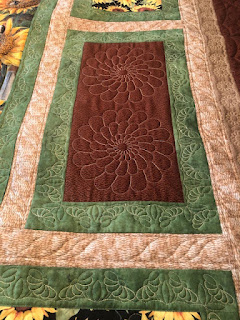 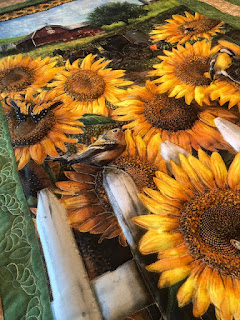 The sunflowers and bird are poofed up. Sorry they don't show up in the pictures. 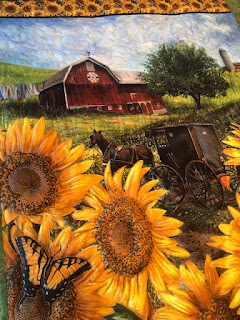 Sorry about all the ranting, but some people should get a real job.