Back To Our Winter Home

We had the funeral for Cindy's Mom on Monday. There was a good turn-out of friends and family. The weather on Monday was very nice, although a little cold.

Tuesday we spent the day getting ready to leave Riverton, Utah and head to Yuma.

We were trying to get ahead of a storm that was predicted for most of Utah starting in the afternoon. We made it for the most part and only got a few raindrops on our windshield. We were through Las Vegas by 12:30 and made it to Yuma a little after 5:00. We stop a few times on the way down, which takes a little time. We had a good drive with no problems.

Thursday we were busy getting set up for Christmas. We got the house decorated and everything put away.

This morning I got to play shuffleboard.

We spent some time last night getting some capes ready for the Yuma light parade, which is next Saturday. The Palms Bike Brigade is entered. The theme this year is something to do with Yuma Agriculture so it has been decided that we will wear Red Pepper Hats and we found some Pepper fabric for the capes. We will have some pictures of the costumes and the parade next week. It is a Light Parade, so everyone will be wearing battery operated lights on the Bikes and on our clothing. I had a lot of fun last year and hope it will be fun this year.

Thanks for visiting.
Posted by Ray and Cindy Warner at 7:02 PM 2 comments:

What is All This White Stuff?

I only thought I was cold before, when the temperature gets to 19, I will really be cold.

We haven't been in snow for at least 4 years. 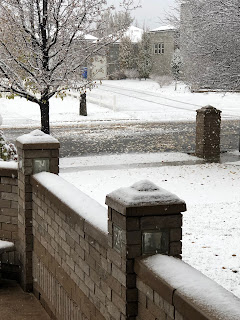 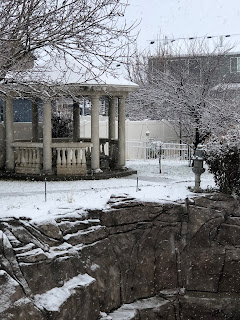 Penny is four years old and hasn't ever seen snow before. When she goes out she has to have her jacket on, which normally she hates. 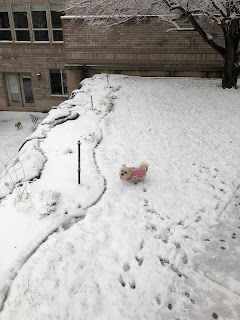 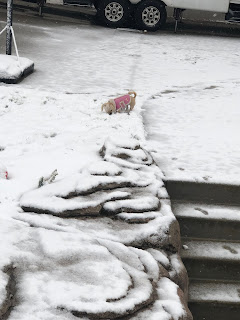 The prediction is for the snow to continue until about noon and then get really cold. Hopefully we will have decent weather after that for a few days.

The prediction for next week is partly cloudy through Wednesday and then snow for the next 5 days. It looks like we are leaving just in time.I can hardly wait to get out of all this cold.

Thanks for visiting.
Posted by Ray and Cindy Warner at 7:50 AM 3 comments:

We had a Happy Thanksgiving

We were invited to Stephanie and Pat's for Thanksgiving. The live almost an hour south of us near Nephi, It rained hard all the way and we got a little sleet part of the way.

After we got there it quit raining and we got a picture of the snow line on the mountain. It is almost down to us. 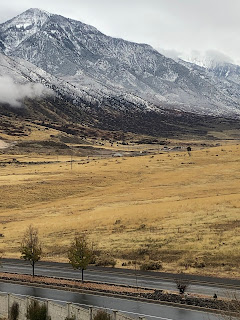 Cindy's three oldest kids were there along with grand kids and one great grand son. 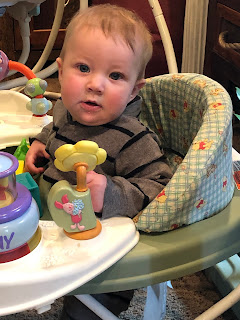 Stephanie is Cindy's oldest daughter and she had prepared lots of food. We definitely didn't go home hungry. 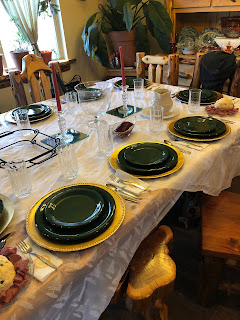 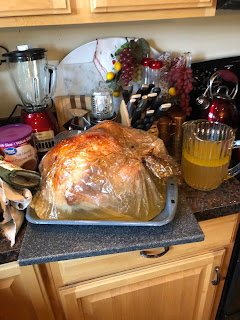 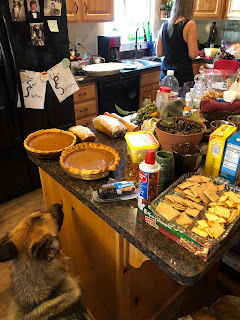 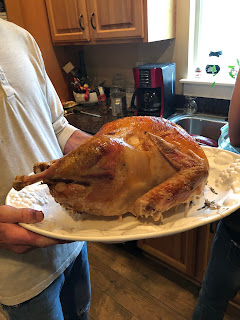 They had me carve the turkey. 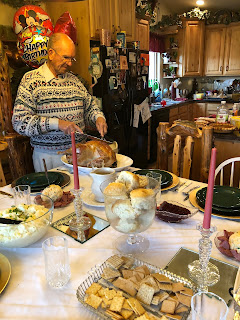 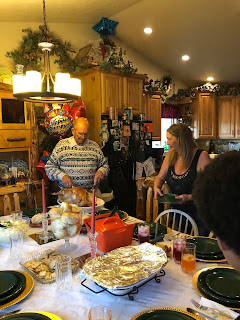 We stayed and visited for a while. Some of them wanted to go to Black Friday sales which start at 6:00 Thursday night.

We have my Mother-in-law's funeral scheduled Monday at 11. We expect to be busy most of Monday, then Tuesday we will get ready to go back to Yuma and leave on Wednesday (weather permitting).

Thanks for visiting.
Posted by Ray and Cindy Warner at 7:18 PM 3 comments:

There has been lots of frost the last few days. Too cold for me.

We got word Saturday morning that Cindy's Mom had passed away. She hadn't look very good all week but had a little rally Wednesday. She would have been 90 at the end of December.

Friday when we were there, she didn't look well at all.

Because of the Holiday next Thursday, the funeral won't be held until next Monday.

We Are Back In Utah

We have both turned into Arizonans, Boy! It is cold here.

Sunday we got a call from Cindy's sister Linda that we probably should come back to Utah. Their Mom who is almost 90 is in very poor health and probably doesn't have much time left.

We spent Sunday afternoon getting ready to come back to Utah. I had to line up someone to take care of a shuffleboard league I am the captain of and Cindy took her quilting patterns to one of the quilters so the class could go on.

Monday morning we left Yuma fairly early and got to Orem where Cindy's Mom lives at about 6:30. It was a long day driving partly because Cindy had hurt her foot Sunday night and I had to do more than my usual amount of driving.

Cindy's mom woke up, but wasn't able to talk and didn't seem to recognize us. She only woke up for a short time.

After we got home in Riverton I had to take Cindy to the Insta-care to have her foot x-rayed. The Doctor couldn't find too much wrong but gave us a prescription for pain which I went and picked up.

It was a really long day.

Today we spent quite a long time at Cindy's Moms and she woke up a lot longer but still isn't talking much and is hardly eating anything.

We are not sure how long we will be here. We both have been cold all day. Tomorrow we will spend some more time in Orem.

Thanks for visiting.
Posted by Ray and Cindy Warner at 7:12 PM 2 comments:

We Had A Happy Halloween

The weather has been wonderful.

We had a Halloween pot luck at the club house. There were many varieties of food and so much that it was impossible to sample it all so I started with the desserts before what I wanted ran out.

The rest of the food was very delicious. This was one of the times that if you went home hungry, it was your own fault.

We could also dress up in costumes if we wanted. Cindy and I went as deviled egg. Some of the people that saw me without Cindy thought maybe I was dressed as a good egg. We had to be together for them to get it. 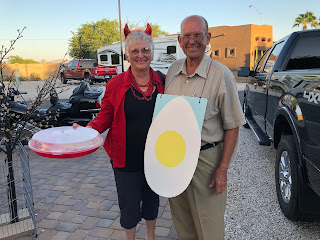 There were lots of different costumes. One couple dressed as rodeo cowboys. There were several witches and a vampire costume. Another couple had Skittle Pox. 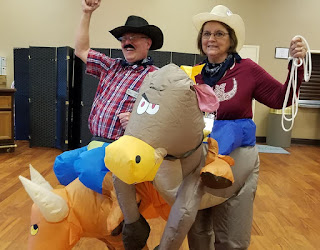 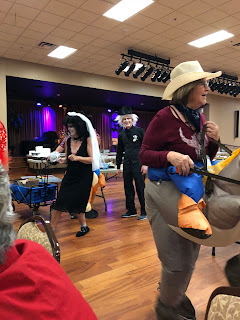 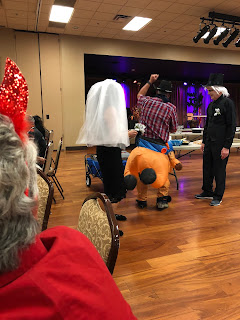 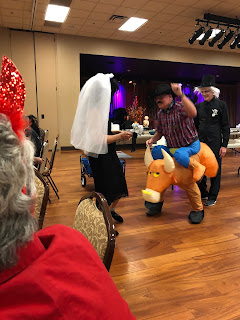 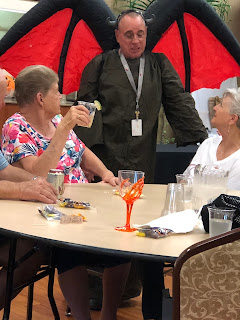 After there was a band which played for a while.

Another night we went to the local drive-in (a video played on the side of a fifth wheel). We got to watch  Young Frankenstein which everyone there has seen numerous times, but is so silly that it is funny. 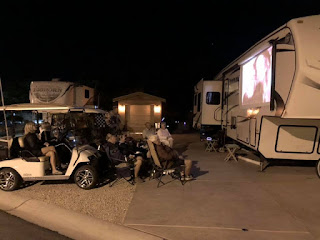 Some of us walked and a lot drove in, in their golf carts. 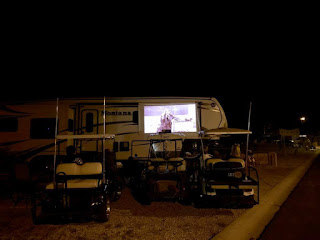 I guess we have turned into Arizonans because all the spectators soon got chilly. It was only down to about 58 degrees.

Shuffle board has started already and we are playing three days per week.

Have I mentioned that I like my time in Yuma?

Thanks for visiting.
Posted by Ray and Cindy Warner at 6:19 PM 2 comments: