These Times Are Bringing Out The Good And The Bad

With the Coronavira thing going on, we are watching reports on TV of some very good things people are doing for others, even giving some people food and face masks, but we are also watching lots of violence over the killing by a policeman in Minnesota. While I can't condone what the police man or the other police did, having people loot and burn businesses is very wrong.

We watched a Salt Lake City TV station live last night showing all the rioting going on in Salt Lake City. Two cars were burned, rocks and glass bottles thrown at police (and newscasters). There was lots of damage to apartment buildings and cars in one of the new car lots. A lot of the rioting and damage was within a block of where Cindy worked for the Utah State Board of Education office, so it meant a lot to her. We would have never believed it would happen at our home state. The Salt Lake mayor put a curfew on the City from 8:00 last night until 6:00 AM tomorrow. We watched a lot of the protesters getting arrested. Cindy watched a TV scene where an old man with a cane was walking in Salt Lake, and because of the curfew, a policeman pushed him to the ground. Why couldn't he have just told him about the curfew instead of just pushing him? We wondered if maybe the man just didn't know about the curfew.

We saw a report that a lot of the looters back east are people that have come in from out of state.

Today the Arizona Governor ordered a nighttime curfew for the whole state for the next week.

Cindy did watch some peaceful protesting with police and protesters peacefully walking side by side which is probably the good thing. Here in Yuma, There were people out with signs yesterday, but we didn't hear about any violence or property damage.

I'm sorry to write about this, but we want to be able to remember what went on at this time in our lives.

When we watch the protests there is no such thing as social distancing so the number of virus cases will probably go up.

It's a good thing for air conditioning. Whenever we go outside after about 9:00 in the morning, it's like getting hit with a furnace.

Today I went to Fry's and used their pick-up service. The main problem I can see with the pick-up area is that there is no shade. I had to leave the truck running while I waited to get my order and the truck's outside thermometer kept going higher and higher. The following picture is the hottest I saw while waiting: 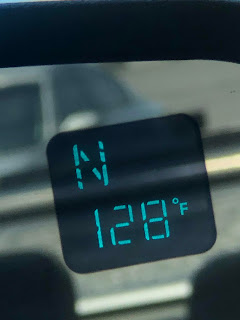 While we are still here Cindy and I finished up another UFO (Un-Finished Object for you non quilters). This one was a kit that Cindy says we bought in Soldotna, Alaska the summer we were there at a yard sale. We have had the kit since 2013, that's a long time to keep a UFO. It is Called Early Snow and is supposed to be a wall hanging. Cindy always says her walls don't need to be kept warm and so we added the flying geese and two more borders and turned it into a throw. 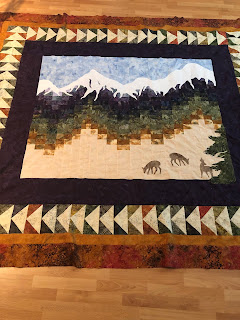 The deer, snow and tree on the right side are applique. The main part of the quilt is Bellagio.

I have been watching a bird in a nest at the grass where I take Penny. I am pretty sure there are babies but if so, they stay pretty well hidden. I did get a picture with the mother sitting on the nest. 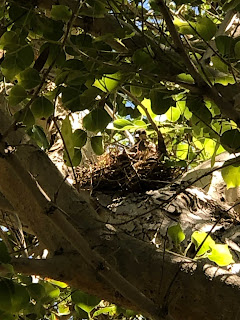 Penny's tooth appointment is next Tuesday and then we will think about going back to Utah.

We have been notified that our Church is opening up again, but with lots of restrictions: Families sit together no closer than 6 feet to anyone else and only every other row. Face masks are recommended but not mandatory. For now anyone over 65 or any illness are asked not to attend and the meeting will be shortened. There will be no song books and they are asking that everyone leave immediately after the service and not to come early. They are trying to be careful with the corona-virus thing. How life has changed for everyone!

Thanks for visiting.
Posted by Ray and Cindy Warner at 3:14 PM 2 comments:

Penny got her haircut Monday and looks like a different dog. 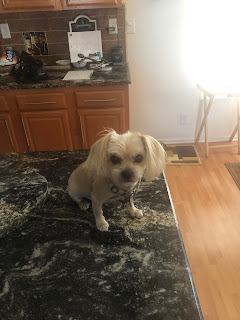 The only problem is that she gets cold at night and wants to be under the covers next to me at night to keep her warm. Usually when she gets cold she will get under the covers next to me for a little while until she warms up and then goes and on top next to Cindy. Now she is by me most of the night. She always has thought she needs to be right next to us while she sleeps and we have to be careful when we roll over.

Last evening some of the people in the park met at the clubhouse with their bikes, carts,and cars to form a small parade for one of the ladies that lives in the Park. She is the recent window of the popular activity director that passed away this spring. Everyone practiced social distancing and some even wore masks in their cars and golf carts, which we thought was a little overkill when everyone tried to keep their distance, but I guess everyone needs their own level of comfort. 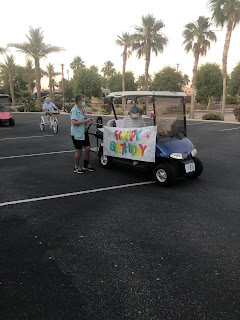 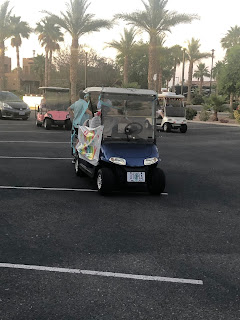 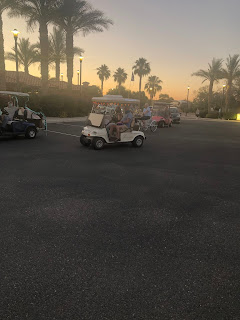 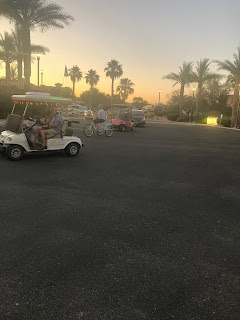 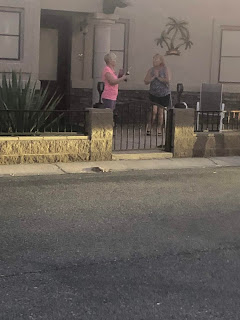 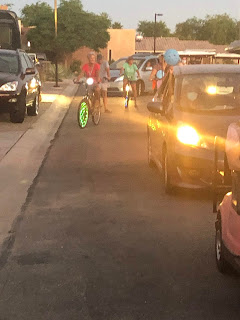 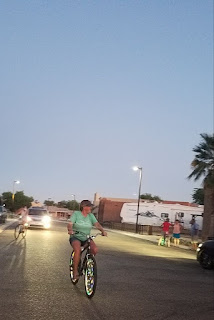 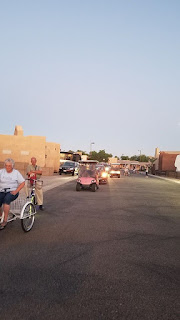 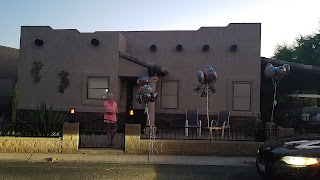 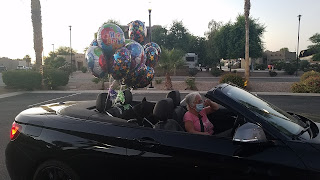 Whatever it takes for a little break from the usual. We had a fairly good turnout.

Today we decided to take the plunge and go to Fry's early to do some grocery shopping. It was a lot different than last time we were there. They seemed to be better stocked on things like toilet paper and paper towels, although they only allow one of each per family. The rest of the store was very well stocked. about 50% of the customers were wearing masks. I noticed it was the younger ones that didn't seem to wear them. They must think their invincible and maybe when I was their age I thought the same thing. I'm afraid as I have got older I have noticed that maybe I'm not so invincible after all.

I took some pictures of a plant we took over when our neighbor left which we added to our water system. It seems to really like what we are doing to it. 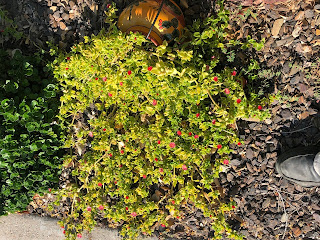 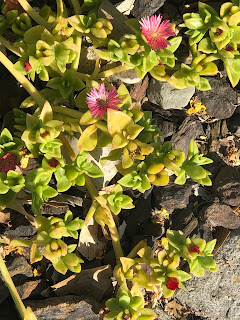 We finish another king size quilt using up almost 18 yards of fabric. No wonder we buy so much. Cindy says she is not a fabric hoarder, she just can't sew as fast as she can buy. But to be honest she does get lots of help with the buying.

I read this on a blog: Everything For Summer Is Cancelled, May As Well Just Put Up The Christmas Tree And Call It A Year!!!!

Thanks for visiting.
Posted by Ray and Cindy Warner at 10:24 AM 2 comments:

We had a few cooler days and then it warmed up again. The weather guessers are saying it is going to be cooler next week.

Our Park has started to open things up. The pools, the exercise room, billiard room, Pickle ball courts, and shuffle board courts are now open to use with social distancing.

We have been busy working on more quilts and Cindy has finished some UFOs. Some have been in progress for quite a while.

Penny got where she refused to eat and I had to take her to the vet. They found some abscessed teeth which will have to be removed. While they have her, they told me that they would clean all of her teeth. I have tried to brush them but she refuses to let me, so it probably isn't any wonder she has bad teeth. Her operation isn't until the 2nd of June so we hope to go to Utah soon after that. Next Monday Penny is scheduled for a hair cut.

About the highlight of the last 3 weeks or so was going to Fry's using their pickup service. Yes, I know, we have such an exciting life. Not! The people still in our Park are practicing social distancing so not much is going on. We have been riding our bikes some mornings before it get too hot, but mostly we have been sitting around a lot.

That's it for this time.

Too hot out to do anything during the day.

We have been riding our bikes around the park first thing in the morning and once in a while in the afternoon. It is supposed to get up to 107 tomorrow and then cool (?) off to the 90s next week.

We haven't had much contact with anyone here in the Park because most people have left or are keeping to themselves. It really is too hot to go out much.

Cindy has finished up some more quilts, we have lost count on how many this season but it has been a lot.

She finished the Christmas embroidery quilt she has been working on. She made it king size by adding a few more panels and borders. Now it will be my job to quilt it when we get back to Utah. 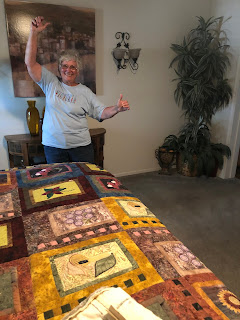 We are hoping to leave the first of June, but that remains to be seen.

We ran out of M&M peanuts and had to get more from Sam's Club. We tried their pickup service and while it seemed to work alright, it still isn't near as good as Walmart.

I got some more pictures of a quilt I posted about last time but with the borders this time and again we made it king size. 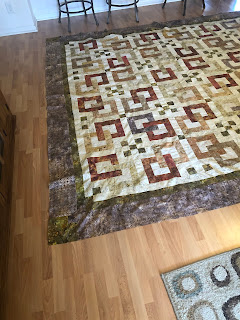 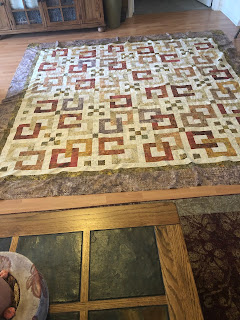 We finished a small quilt Cindy found on line someone called a quarantine quilt, supposedly one house for each day they are in quarantine, but it has gone on a lot longer than 21 days, so Cindy called it good enough. 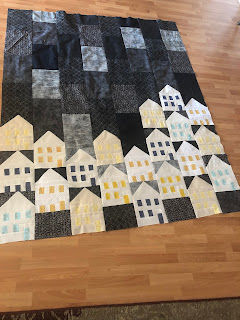 There will be a couple of borders, which aren't on yet.

I don't have much else to report.

Thanks for visiting.
Posted by Ray and Cindy Warner at 5:20 PM 2 comments: