We decided to come back to Utah for several reasons, not the least was the temperature. It got to 109 in Yuma today and looks to stay hot. Also I have been watching the count on Yuma County coronavirus and it has been going up a lot for the last little while. There have been well over a hundred new cases every day for a while with 233 added  today alone. The total is now at 5364 with the hospital at capacity. We felt we would be safer in the Salt Lake City area.

We have both been working almost none stop since we got home. The first day Cindy picked a garbage can of weeds and has had me trim some of our trees. 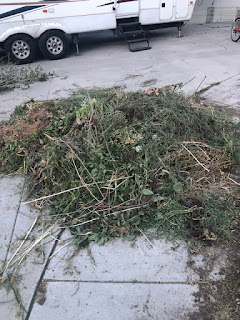 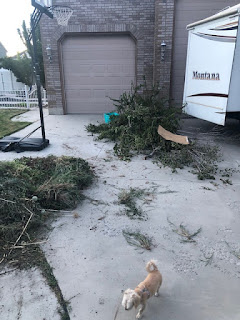 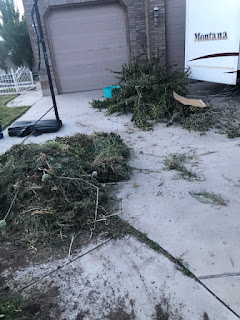 We have got quite a large pile of leaves and weeds.

Penny has been feeling better and has to check out everything. Since we got back to Utah, she doesn't want to be left alone. If we go outside, she follows us. When we come inside we have to be careful because she will be right behind us. 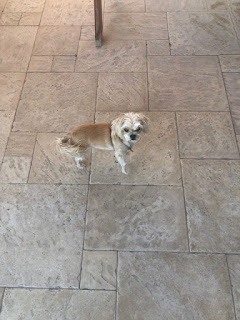 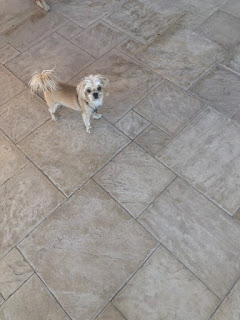 We have been clearing out some of our planting area so Cindy could put out some pots we bought a long time ago at a yard sale. The kids buried them in our back garage and we finally were able to get to them. 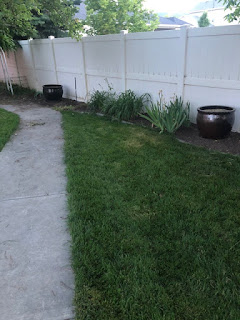 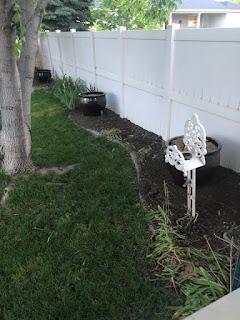 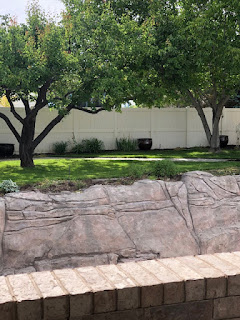 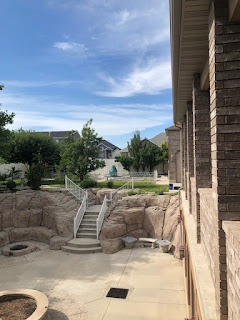 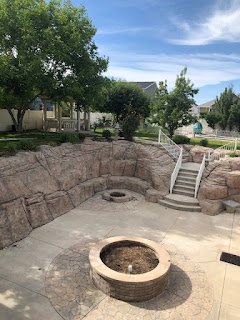 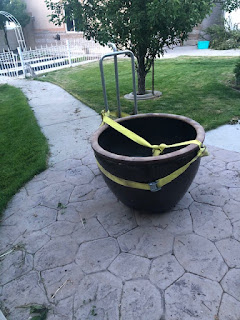 The largest pot is going to go in the middle of the planting circle in our walk-out patio. Cindy and my daughter Paula thought it would look good there. I need to build the circle up with more dirt before we can take the pot down the stairs.

Any way, we have been busy working almost non-stop and we are both getting wore out.

Thanks for visiting.
Posted by Ray and Cindy Warner at 5:46 PM 6 comments:

It has been very warm again.

After her tooth extraction, Penny wanted to be held all the time. She did get better about taking her medications. We finally finished the last of the antibiotics last night so she doesn't have to have them any longer.

When we put the cone of shame on her she would go into a corner and look at the wall and just sit there. We are sure she thought we were punishing her. We didn't put it on very often except at night for the first few nights and that is part of why we held her as much as we did. 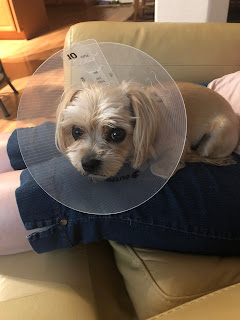 She finally quit trying to chew her foot and we haven't had to put it on her lately. She is eating better and acts like she feel a lot better, however she still swallows most of her food whole. I guess that's not unexpected with not many teeth. We are glad to see her feeling better.  She has a follow up Vet appointment next Tuesday and then we plan on leaving next Friday for Utah.

We have been working on a quilt kit Cindy has had for a while. It had some fairly easy paper piecing in the middle part of the blocks. We did get it finished although this picture only shows the blocks. 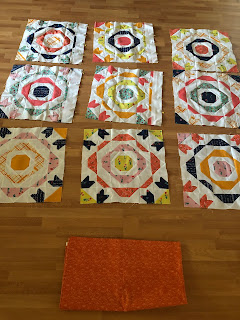 Cindy thinks with all the protests and coronavirus going on, that we should have a cabin somewhere in the trees with a little stream running past it off somewhere all by ourselves.

We are both looking forward to some cooler temperature in Utah.

From the temperature here it is a good thing for an AC that works. We don't go out much and we are glad we are in a house and not our fiver.

Yesterday Penny had an appointment with the Veterinarian for teeth cleaning and we thought a few teeth pulled. I had to have her there at 7:15 in the morning and they told me they would call when we could pick her up. It is kind of like pick-up at the grocery store: when you get there you call and tell them you are there and they send someone out to pick up Penny. They are masked and they take her inside.

After about 30 minutes I got a call from the Veterinarian to tell me that when they x-rayed Penny's jaw, the infection and decay was a lot worse than they thought at first and that their estimate of charges was going to be about double what they thought last time. Instead of being a thousand dollars, it was going to cost up to two thousand. I ended up paying eighteen hundred. Of coarse I told them to go ahead. They told me they had to pull 21 of her teeth which is one half.

Finally at about 1:00 I got a call to pick her up at 2:30. She was still a little groggy. they told me that the pain killer they gave her was good for 24 hours and to give her more this morning. By about 10:00 she started to hurt but I didn't dare give her the pain killer, so Cindy and I and Penny all  had a bad night. Also they cautioned me about not letting her scratch her jaw, so I put the cone of shame they gave me on her for the night. We were afraid that while we were sleeping she might do some damage to the stitches.We still have to watch her but as long as we hold or watch her we haven't put the cone back on. Right after I first put the cone on her, she somehow got out of it and I had to tie it on better.

With her pain meds she acted a lot better today but we can tell she is still in pain She isn't eating much but is doing a little better. She sure wants us to hold her most of the time.

The vets want to look at her on the 16th, so we will be here at least till then. We are hoping it doesn't get much warmer before we are able to leave.

We did finish another UFO. This time a nursery rhyme embroidered quilt. There were two sizes of blocks and we didn't have a pattern, so we had to figure out how to lay it out. 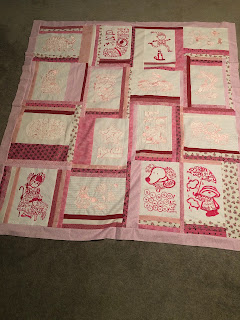 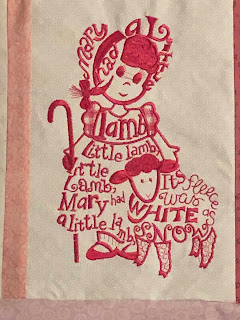 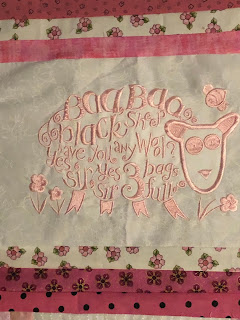 I think it turned out pretty well.

Thanks for visiting
Posted by Ray and Cindy Warner at 7:21 PM 3 comments: