Cindy Turned Into a Pot Farmer

It has been nice and warm since we've been here. We did get some rain one evening. Other than that we have no complaints with being here.

Cindy's birthday was last week and we didn't do much.

We have been busy doing lots of different things: for instance I went to the dentist in Algodones for some work I needed done. I haven't decided for sure whether to have the implants done or not, but probably will. Even with out that I have to go back at least 2 more times.

Cindy has been busy being a pot farmer (No not marijuana). lol We have a lot of ceramic and plastic pots. She has bought lots of tomatoes and different herbs and vegetable seeds which we planted and most are growing quite well with the exception of the cucumbers which came up and then fell over and died. We had to get more seeds and she is trying them again. 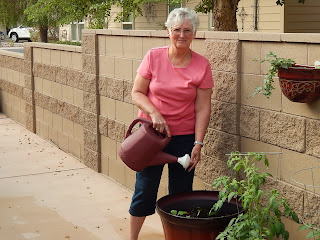 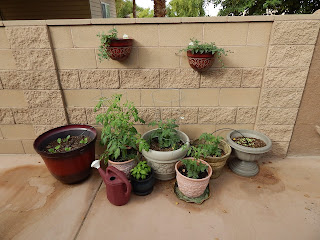 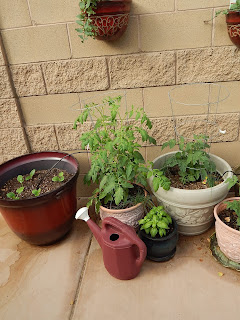 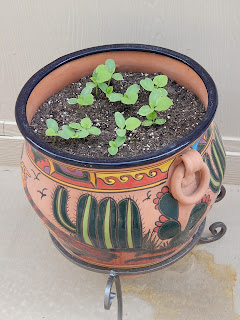 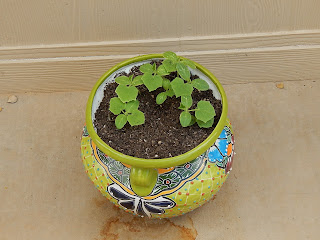 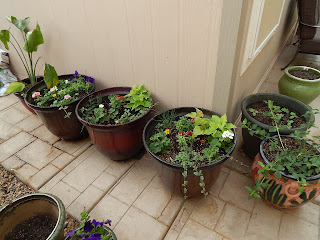 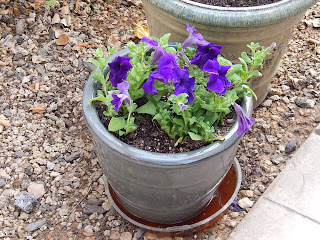 One of the tomatoes has doubled in height in only 2 weeks and has blossoms on it. Hopefully we get some fresh veggies before we have to leave in the spring. 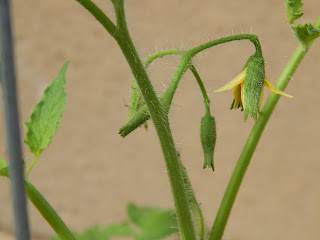 We plan on putting some of the pots (the ones with flowers) in front when it cools down a little bit.

We finally got an offer from UDOT on the house they are taking. It seems to be a fair offer. Interestingly, we found something to replace it for exactly the same price.

There isn't much going on in this park yet, but Halloween is the big kick-off. We have a pot luck on Monday evening with costumes optional. That should be interesting.

Thanks for visiting.
Posted by Ray and Cindy Warner at 5:37 PM 5 comments:

Enjoying Our Time Together

Right now it is 88 degrees Fahrenheit. Earlier this week the car read 102 degrees. I'm not looking forward to the electric bill because the AC has ran almost constantly during the day since we have been here.

After we got here one of the first thing we did was take Penny to the groomer. She looks a lot better and I'm sure she is a lot cooler. 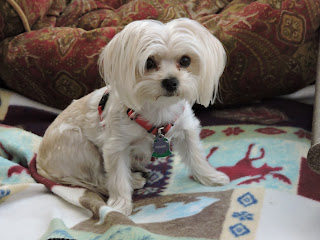 We have been busy in the yard. Cindy went to the nursery and bought some tomato plants and planted cucumbers and squash. It almost seems like early spring in Utah due to all the gardening but this is all in pots.

I spent some time trimming our palm trees and the trash trees in the back (they are actually for shade, but drop lots of leaves and seed pods). Hopefully, by trimming them we don't get so much junk in our back yard like we did last year. I found out the hard way to pick up the palm trimmings with gloves and not bare hands. I ended up with lots of slivers from them.

We also planted a lemon tree which we hope will give us fruit some day. Our grapefruit tree doesn't seem to have as many grapefruit as last year but it might be because our neighbor told us that this summer was unusually hot. We have a small orange tree that looks pretty sickly.

Last night Cindy got some pictures of the full moon just after it came up. I picked what I thought were the best for this post. 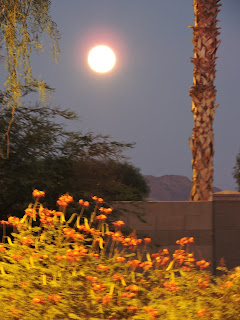 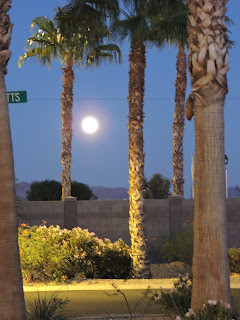 The Park doesn't get things going till the first of November so it has been quiet as far as activities. There are a few people coming into the Park. I've seen one or two per day coming in.

We still haven't heard anything from UDOT about the house so that's still an unknown.

We talked to my sister-in-law last night and she says their Mom seems to be doing a little better and Linda is talking about taking her on a motor home trip this summer. She wants us to go with her but a lot depends on their mother. Linda thinks it might have to be a shorter trip than she originally planned but that is still OK.

Cindy has been busy sewing away and needs some white material but we still haven't made it to Grandma Jo's, but we will soon. She volunteered to have a quilt class making an easy baby quilt but that will wait until more people are here.

Today we were both so excited about getting to Yuma that we woke up at 4:30 Arizona time. We spent the night in Laughlin, Nevada. Arizona doesn't change their clocks from Mountain Standard Time to Day Light Savings Time like Utah, so right now they are on the same time as Pacific. A little confusing? Our bodies are still on DST. It usually takes me about a week to adjust.

We had an uneventful drive to Yuma and had the car all unloaded by noon. The only thing it was starting to get uncomfortably warm for us. I actually saw a temperature on the car that said 102, but the official temperature was only (?) 100. Still plenty warm when we had frost 4 days ago. Tomorrow is suppose to cool off clear down to 99. (LOL)

Tomorrow Penny is scheduled to have a hair cut which she needs pretty badly. She probably will be a lot cooler. We were afraid she might get car sick on the roller coaster road (the road from Needles to Parker) but she slept most of the way. I didn't feed her this morning just in case.

We didn't have much traffic on the way here. Quartzsite is still pretty barren but there are a few die hard RVers there in the BLM sites. It didn't even look a little bit fun, but if that makes them happy.

Our Park still doesn't have many people here and all the things start up about Halloween time but we have things to do, so should be OK.

Sorry about no pictures.

Thanks for visiting.
Posted by Ray and Cindy Warner at 6:31 PM 3 comments:

The weather here has been a lot cooler lately but warmed up some today. The snow (the awful 4 letter word) has been getting lower on the mountains.

Today we had an fabric estate sale to go to and found lots of treasures. We were able to get some large pieces of material for a dollar, one of which I measured was exactly 5 yards.There were lots of other treasures also. Cindy found one Anita Goodesign embroidery disc that sold for $75 she got for five dollars. 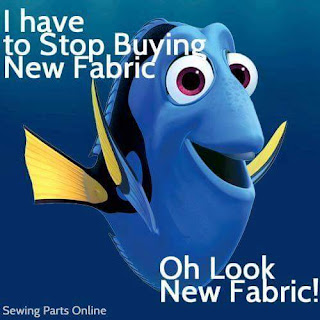 After the estate sale we had a funeral for one of my cousins to attend. He was barely 59 but last December had a stroke and was in bad shape. Cindy and I both wondered if it was made worse because they live in a small town and it took a while to get him to a hospital.

We have been packing the car to get ready to drive to Yuma tomorrow. Last year I told Cindy that I felt like the Beverly Hillbilly's because the car was so full. This year might even be worse, but we seem to be getting it all in. Penny kept going out in the garage while we loaded. She was acting like we were going without her. She sure is a dependent little dog. We can't go anywhere without her wanting to go. It seems like she wants to be with one or both of us all the time.
As I said on my last post, we still haven't heard anything from UDOT in regards to them taking the other house. We were originally told 6 weeks, which got changed to 8 weeks. It now has been almost 3 months and we decided to leave for Yuma even if I heard anything from them today. When they make their offer, we still have 30 days to accept or reject, so if we hear from them, we are prepared to come back to Riverton. Hopefully is doesn't take them 4 years like it did for our friends.

The weather report shows about 100 in Yuma, but we both feel like we need to get away from all the commotion, even if it is for a short time.

Thanks for visiting.
Posted by Ray and Cindy Warner at 4:17 PM 5 comments:

Getting Ready to Go Party

Today was warm, but it has cooled off and there is a lot of wind and lightning now. Tomorrow is forecast to be a lot cooler.

Since we plan on being in Yuma for Christmas, Cindy decided to have a Mexican party yesterday. After the party she gave everyone their Christmas presents.

We had lots of good Mexican style food: tacos, enchiladas, refried beans, and black beans, along with guacamole. It was very good and if you left hungry, it was your own fault. Devon filled his plate at least 3 times.

Cindy had wrapped all the presents, with the exception of Teesa's, our oldest grand-daughter, which was too big, so we had a treasure hunt for her. It seemed like it was fun for her and the kids following her. She likes to make jewelry from beads and got two boxes of them. She seemed happy to get them after all the running around on her treasure hunt. she did get somewhat frustrated on some of the clues and needed my help.

After the presents were unwrapped Taylor, who is six, Told Cindy that it was the best Mexican, Thanksgiving, Christmas party he had ever been to.

Cindy's Mom and sister, Linda, even made it. Her Mom seems to be doing a little better but is still quite weak and needed help going up the stairs into our home. We had all of Cindy's family here, with the exception of Scott and Daniel who live in Phoenix. We plan on seeing them while we are in Yuma.

We still haven't heard anything from UDOT about the house and probably will have to come back once we do hear from them.

I have been busy quilting a lot and we seem to be running out of backs. We might have to go back to Maine and visit Marden's next summer for more of their low priced fabric (as if Cindy doesn't have enough).

Thanks for visiting.
Posted by Ray and Cindy Warner at 8:18 PM 3 comments: