We have had nice weather for the most part. It was windy a couple of days but has been fairly warm.

We got our second virus shot a week and a half ago. Hopefully we won't catch the virus. I really want things to get back to normal, that is no more masks or all the deaths from the virus. We both were tired and cold the evening we got the shot and didn't feel exactly right the next day, but the next morning we both were okay and haven't had any problems since.

We noticed that Penny had one of her eyes stuck shut and had to wash it out several times. During one of the washes, I got a small piece of dried leaf. She has been doing a lot better since we got the leaf out. I guess when your only 6 inches from the ground, the wind must have blown dirt and the piece of leaf into her eye.

We went to a yard sale a while ago and Cindy was able to get two bags stuffed with scrap material for a dollar each. At the same yard sale, actually an estate sale, there was a brand new Accuquilt Go with several long dies. They normally sell for about $400.00 for the Go and the dies we got sale for about $100 dollars each. There were four dies. We haven't bought one because of the price, but Cindy asked how much they wanted and was told $10.00. Sold! Since, we have made some squares with it, and it sure makes it a lot easier to cut out the squares. Cindy says I seem to have taken over the machine. It is a hand operated model, but I really like using it. 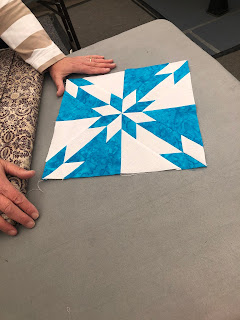 This is one of the blocks we made using it.

We are looking to go back to Utah around the first of April, but it will depend on the weather.

Cindy counted how many quilts she has made since we have been here and says seven. Pretty good considering we have only been here 2 1/2 months.

Here are some of the finished quilts: 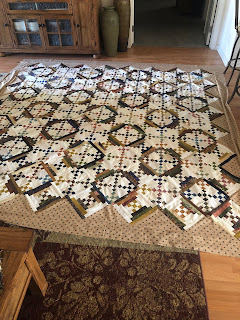 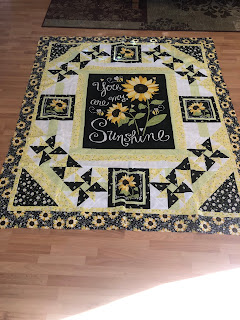 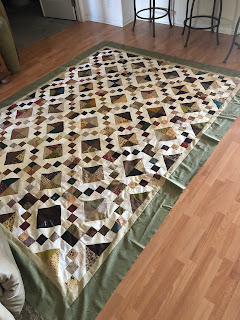 The first one was on an earlier post but without the outer border.

Todays weather is pretty much what we've had for a little while. It is supposed to get windy and cooler later in the week but still a lot warmer than the frozen north.

Penny was due for her kennel cough shot so we took her to the vet. They check her over and found sore gums and recommended we get her teeth cleaned. So two days later we had to take her to the vet fairly early in the morning and the moon looked huge. I got a picture but we didn't have anywhere to pull over so it's not the best. 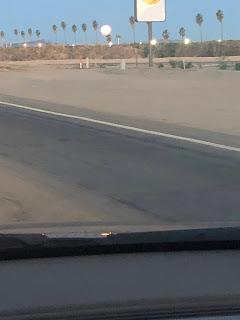 The moon is the large circle above the palm to the left of the sign. It looked a lot better in person.
When we got Penny back home, she was pretty out of it for a while, as they had to put her out to clean her teeth, We felt it was better than if she lost any more teeth.
The next picture is how we feel the whole last year and start of this year have gone. 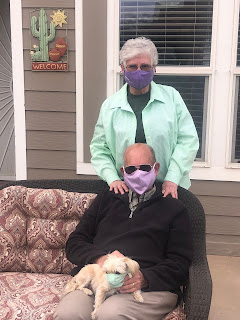 I have been playing shuffleboard three times a week. We don't have near as many people playing but of course there are very few Canadians here so I guess it's to be expected. I think the most players we've had is 20 when in a normal year there are usually 32 or more. Last Friday we only had 8 players. We were playing every other court with everyone wearing masks, but this last week we went to two empty courts between used courts so we could be further apart and not wear masks when  we shot if the person desired. 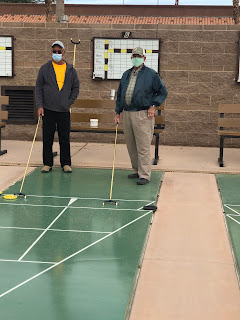 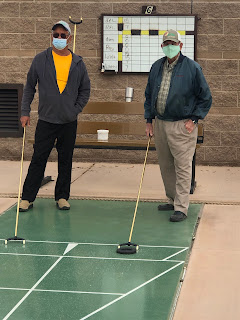 I enjoy playing shuffleboard for the 2 hours it takes.
Cindy still is busy with making quilts.
We left for a while one day and we have a Roomba which does a good job vacuuming, but it got hold of one of Cindy's thread spools and wrapped itself with blue thread. It took me a while to get it all cut off. 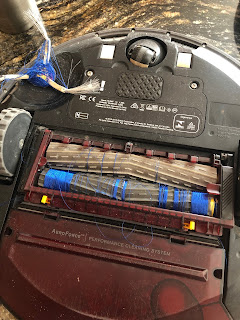 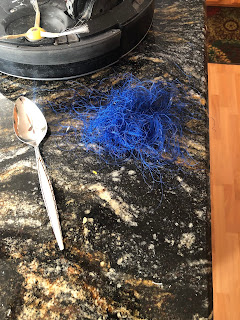 To give some idea of how much tread it wound up, the spoon by the pile is a large serving spoon. Roomba almost emptied the spool of thread. I'm sure if we hadn't got home when we did, it would have emptied the spool.
We still don't have our second virus vaccination but should be able to get it soon.
Thanks for visiting.
Posted by Ray and Cindy Warner at 5:32 PM 3 comments: