Skyler’s Birthday and Penny got a Hair Cut

The smoke cleared out for one day and then was back as bad as ever.  It sure is getting tiresome. It has cooled off a little bit.

Yesterday was Skyler’s thirteenth birthday. He is now officially a dreaded teenager. He went into eighth grade this year. They sure grow up fast. We went out to a buffet to celebrate his birthday last evening. 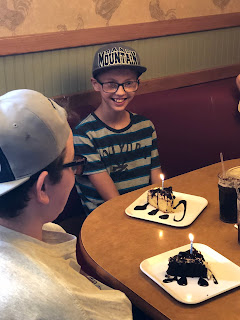 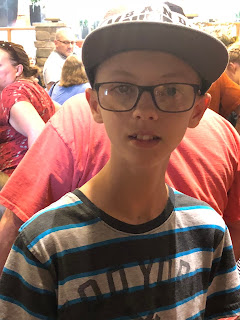 Penny got a haircut yesterday and now looks a lot cuter. She is ready to go to Yuma where she will be very warm for a while. We found a new groomer that we like and think she did a very good job on her hair cut. 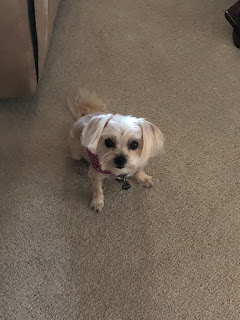 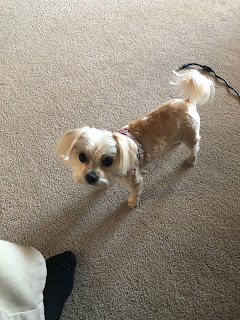 We plan on leaving about a week after Labor Day (two weeks). It will be very warm for us as well, but we are ready to leave.

I still have some quilts to do but they will have to wait for spring.

Cindy’s Mom seems to be doing better. When we went to see her she was moving around and talked to us for a while. Her birthday is right after Christmas and she will be 90. We hope to get back for a few days for her birthday party.

It has been a little cooler and yesterday the air was a lot clearer. Today is another story, as it is very smoky again. We can’t see the mountains to the east at all today.

We were out early yesterday and the sun was peaking over the Wasatch Mountains and looked very red. Unfortunately, when I took a picture of it, it looked more like the moon than the red sun it was. 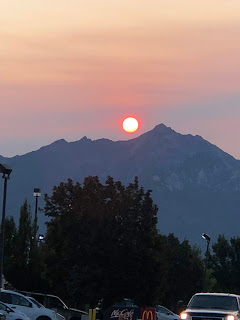 After we took this picture and the sun got higher in the sky it turned into a nice clear day.

I have been working on some more quilts. The Christmas quilt is one Cindy said we bought the kit for about two years ago. She has had it finished waiting for me to quilt for a while. It took a little longer than usual to quilt, but I finally finished it. 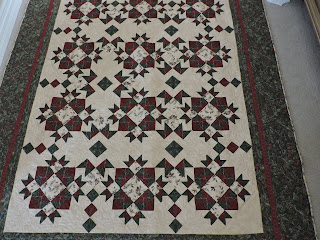 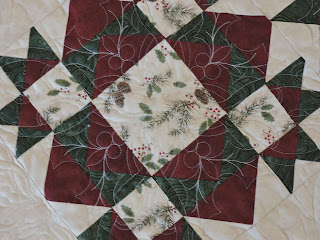 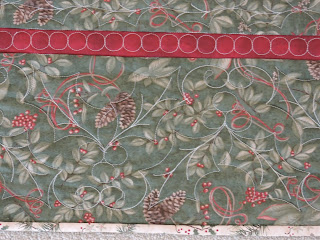 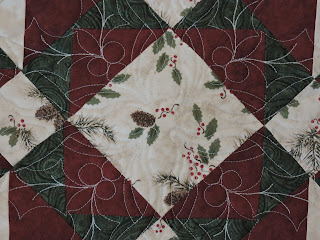 The other quilt is one that we bought the pattern for while we were in Shipshewana last year. The sun burst took a while to set up and quilt, but I think it turned out nice. 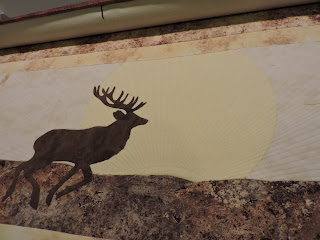 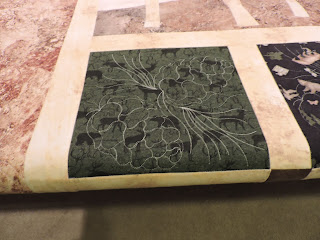 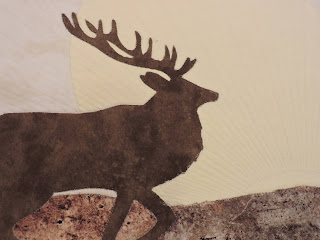 We have decided to leave here for Yuma as soon after Labor Day as possible. If something happens with Cindy’s Mom we will only be one driving day away. We could take a plane, but with having to get to the airport early and the long layover in Phoenix, it only saves about 3 hours to fly.

We went to see Cindy’s Mom last week and she seems to be doing a lot better. At least she was able to move around a bit and was a lot more alert than she was. She is now working on one of her puzzles. It seemed to be a fairly hard one with lots of different shades of blue.

The weather today was just a little cooler and a lot of the smoke seems to be gone but it is still a little hazy.

Yesterday we went to my oldest grandsons wedding reception.  Noah and Emma were married in Philadelphia and had a reception last week there for the relatives in that part of the country. The second was held not far from us at a fancy house that rents out their property for weddings and receptions. All of the Utah relatives got to meet the bride and her parents along with Noah’s brothers and sisters. I haven’t seen some of my grand kids for a while. My daughter Andrea’s Mother-in-law did the meal for all the people. She makes the best cookies ever. We couldn’t tell them from the ones we would buy at any bakery except they were better. 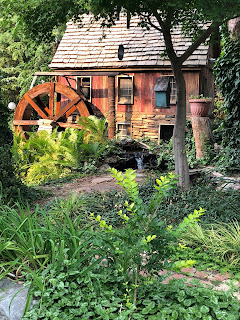 The water mill was turning and there is a pond with waterlilies and coy below it.


They exchanged rings for the benefit of the audience.

I have still been quilting and Cindy took some pictures of some of them. The green baby quilt is one she is still working on the binding. 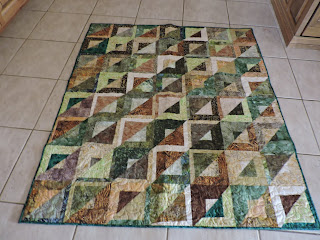 This is the back on the one above. Cindy made extra blocks, so we incorporated them into the back. 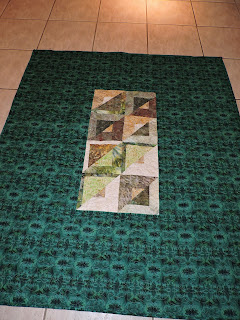 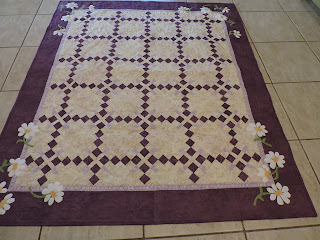 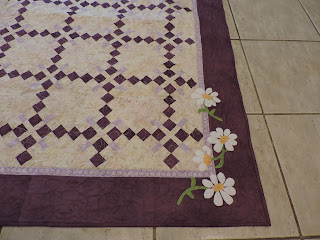 The applique took some time to go around and not quilt over. 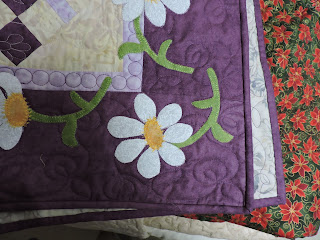 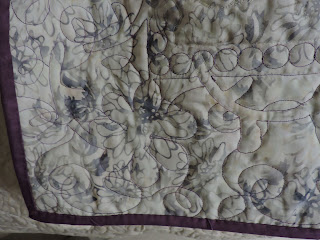 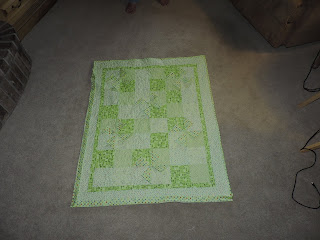 I am now working on a fancy Christmas quilt that will take a while to finish. I promise to put pictures on the blog when it is finished.

Another one of my to does is to get Penny a haircut. She is getting very shaggy. 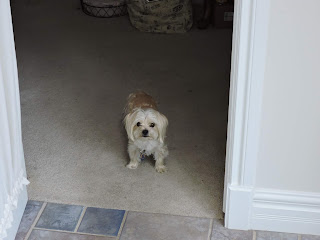 I got the fifth wheel winterized but still need to get the truck lubed and oil changed along with filling it up with diesel. I guess a little at a time.

The weather today was a lot nicer but still warmer than the Oregon Coast.

Today Cindy took some pictures of some of the quilts I have been working on. She told me she is trying to get rid of her scraps which I don’t think is possible. Anything 1 1/2 inch square or larger she keeps. Some of the ladies in Yuma also gave her their scraps. 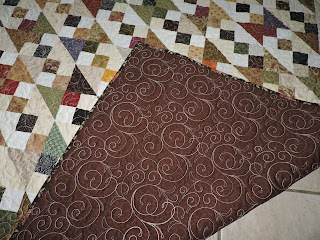 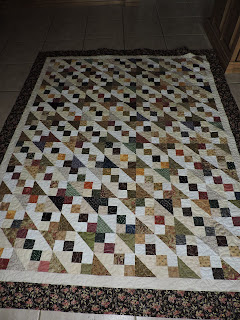 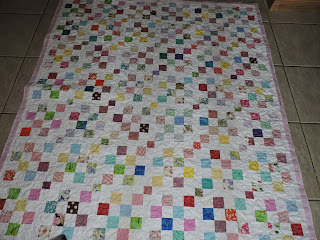 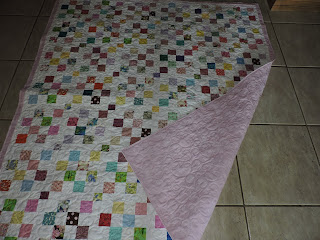 Yesterday we went to an estate put on by a man that always treats us well. There was a curio cabinet with a $300 sticker on it and when he saw Cindy looking at it he whispered to her that if she wanted it, she could have it for $200 dollars. She thought about it for a little while (maybe 2 minutes) and then told him she wanted it. She plans on filling it with finished quilts and got a start after we got it home. 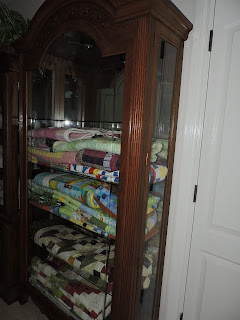 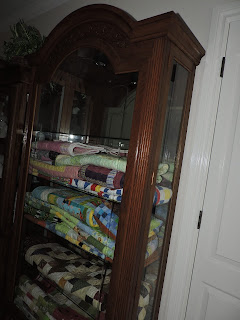 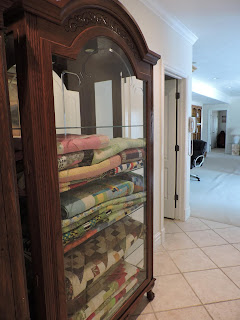 I looked at one of the local furniture stores to see how much they wanted, and anything even close to the cabinet we bought was over $1000. Cindy is sure we got a good deal.

She also got a picture of me under the fifth wheel taking the level up cylinder off. I’ve got it ready to put back, but so far haven’t taken the time to do so. 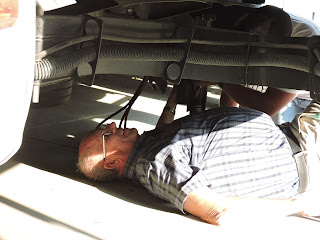 It was a little bit cooler and threatened to rain this morning, I got hit with maybe 10 drops and then it quit.

I quilted 2 of Cindy's quilts the last 2 days and she has 2 more ready for me to do. She doesn't like me to get caught up as if I could when I'm about 20 behind.

I also worked on a leaking Level-up cylinder on the fifth wheel. I took it off and took it apart. At that point I didn't know how to put in a new seal so I took it to a Hydraulic repair shop. When I talked to them on the phone I was told I would have to leave it, but when I got there one of the mechanics took it and started to look at it. He found a blemish about half way on the ram that he said could cause the leak. He told me he would sand it if I wanted but he didn't think it would hold up because he took some of the hard coating off the aluminum ram. So he sanded the ram, put a new seal in, and put the cylinder together. He told me I better be prepared to replace the cylinder.

When I went to pay, he asked his boss, the owner, and told him what we found. The Owner told me "no charge this time". How nice is that. When I get ready for a new cylinder I will be sure to ask them if they can supply it.

The air quality is a lot better today. I don't know if it is because they are getting ahead of the fires or the small storm blew the smoke another direction.

We both have been doing a lot of yard work since we have been home. Cindy is getting a little ahead of the weeds.

Thanks for visiting.
Posted by Ray and Cindy Warner at 6:45 PM 1 comment: