We left Jefferson City this morning early. The GPS told us about 5 hours to reach our destination. It took more like 7 because of stops and road construction. Some of the stop lights seemed to take forever. We had a side wind for almost an hour of our trip, which was pretty miserable. Most of the rest of the way it was a nice tail wind, which should have helped the fuel mileage.

We passed through a lot of Amish country. We saw their tracks along the shoulders of the road (for those of you that don’t know Horse manure). We also got to see several horse drawn buggies but Cindy was only able to get one picture. 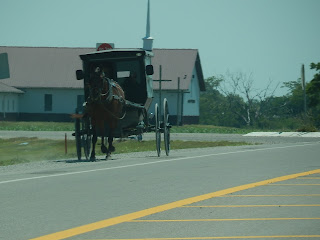 We finally made it to Iowa and if anything the roads are not as smooth as Missouri. Then we started to come to road construction. I know it sounds like I’m complaining but we had an uneventful drive which is always good. 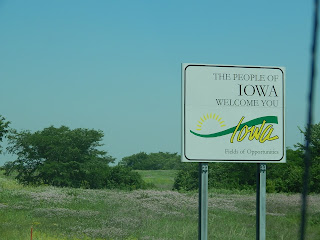 Today Penny turned 3 years old. We got her when she was 10 weeks old and she has lived in the fifth wheel more than anywhere else. For such a little dog, she has done a lot of traveling. 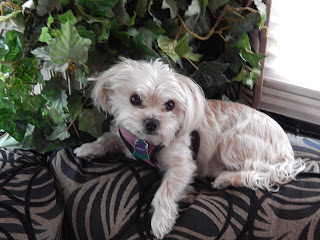 We are at the Cutty’s Des Moines Camping Club. We are here with Coast to Coast for $5.00 per night. It is a very large Park but some of the sites, in my opinion are laid out kind of weird. The have long sites for two, but both pull in from the same direction. So if someone is in the front, a motor home pulls straight in behind it, both facing the same direction. If a fifth wheel is behind, there is no way to unhook the truck. Also the sites are a little narrow, but adequate. We will be here for 3 nights.

Thanks for visiting.
Posted by Ray and Cindy Warner at 5:58 PM