This morning started out kind of laid back. We went to McDonalds to use their internet. Cindy wanted to look at a YouTube video on how to sew her quilt pattern. The instructions were kind of vague. She found what she wanted, and now everything seems to be clearer.
After that she spent some time on Pinterest and found a recipe for Italian Shrimp in butter sauce that really looks good. I can hardly wait.

After that we went over to the Yuma Territorial Prison. It was quite interesting. On July 1, 1876 the first seven inmates entered the Territorial Prison at Yuma and were locked into the new cells they had built themselves. A total of 3,069 prisoners, including 29 women, lived within the walls during the 33 years of operation. We went on a guided tour with a volunteer, and saw the cells, the New Yard, the Dark Cell, and a foundation of a cell block that was torn down and moved to the new prison at Florence. We went through a low doorway to get into the New Yard that was lowered so Alan Ladd would look taller when they made a movie there. What was most interesting was what some of the prisoners were in jail for.  Adultery, having sex with a woman and promising to marry her, speaking out against the government, along with murder, fraud, forgery, and the usual crimes. My, how times have changed. Imagine anyone now days getting thrown in jail for some of those things. One woman, Pearl Hart, was tried as an accessory to murder, but was acquitted, which made the judge so mad, that he retried her for holding  the gun used in the murder, for which she was sentenced to 5 years in jail. Only two men successfully escaped and were never caught, although several tried, one man 4 times. The people of Yuma called it a country club, because they had electricity, running water, and a mechanized vitalization system, which the people at that time did not have, while the prisoners called it a Hell Hole. They also had the largest library in Arizona at that time. Some claim the jail was haunted, by a little girl that drowned nearby in the river, and anyone wearing red, could get pinched by her, as she drown, while looking for her doll which had a red dress.  When the prison was closed in 1909, The Yuma High School was there for five years. When the Yuma football team played Phoenix’s Coyotes and won, the Coyotes called them “criminals.” The teams officially adopted the name in 1917, and are very proud of it, and still are known by that name. 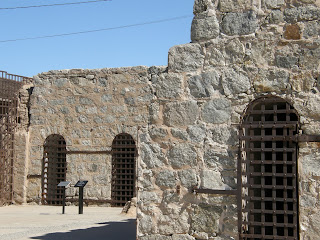 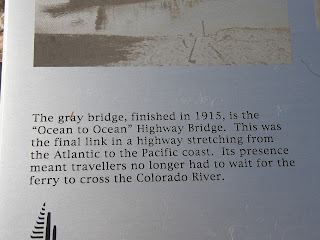 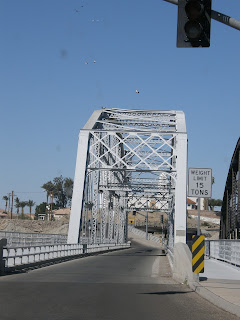 During the depression, some of the homeless going to California were turned back at the bridge over the Colorado River by California authorities if they couldn't prove they had a job, or had money. When they turned around some of they went to live in the now abandoned prison. There is still graffiti and smoke stains in some of the cells.
Posted by Ray and Cindy Warner at 6:45 PM