Moved to The Steps

Not much going on yesterday, except we went to church. At 5:30 the Park had an ice cream social. Quite a few people were there.

Today we got up early and did laundry. Cindy wanted to try backing up in the big parking lot, and if she keeps doing as well as she did, I might have to look out for my driving job. She wanted to drive a little ways so she did for about 20 miles. She didn't have any problems.

We headed toward Lake Havasu, and had rain almost to Parker. By the time we got to Parker, the sun was shining and it was quite a bit warmer. We went into Wal-Mart to get Cindy’s meds, and got kind of frustrated again. It seems that the Wal-Mart in Riverton had filled some of them, and we were not able to get all of them without calling Riverton again. I had called them yesterday to have them taken off their filled prescriptions, but they didn't do it until the pharmacy in Parker called them. I have asked both stores many times not to auto-fill her prescriptions, but I guess they don’t understand what Quit Auto-fill means. But, oh well, we shall see. 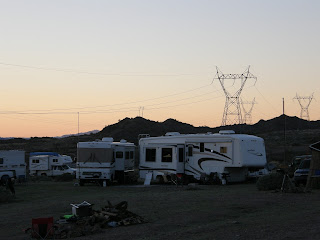 We arrive at the steps at about 3:30, just in time for 4:00 happy hour. This time we are with Escapees, Boomers, and Boon Dockers. Boon Dockers and Boomers are sub-groups of Escapees. There are many BOF’s within Escapees. These are groups with like interests (Bird Of a Feather).  There were probably more than 30 people at happy hour, all just visiting with each other.

Tomorrow a group of us are going into Lake Havasu to see some of the sights.
Posted by Ray and Cindy Warner at 5:53 PM