Last night, (Actually at 3:00 PM) we drove to SARA Park to see the fireworks. We were told we needed to get there early to get good parking and good seats. This was a good recommendation, as the lower parking lot was almost full by the time we got parked. We got what I think was one of the better parking places, as the parking attendant had me park on the road facing toward the exit. We found seating on a little hill, but after the fireworks started, we moved down by our truck because we had a power pole blocking part of our view. 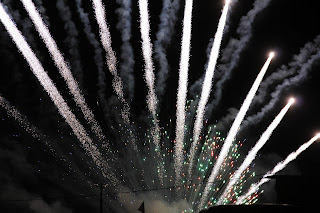 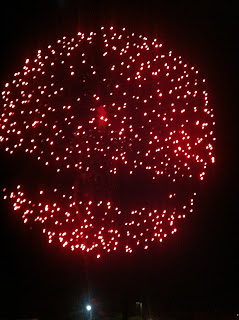 A little history of the Winter Blast: “The skies over SARA Park will be lit up this week like the 4th of July, thanks to the 24th Annual Winter Blast Western Pyrotechnics Association Convention, which brings the latest and greatest in pyrotechnics to the desert. The convention last from February 14-17, but over the weekend convention attendees will give Havasu a treat with spectacular fireworks shows. The biggest nights are Friday and Saturday”.
We enjoyed the show very much, but were not able to get many good pictures because we still need to learn how to shoot fireworks shots. Cindy says it doesn't pay to have a big, fancy camera, when you don't know how to use it. LOL I have posted a few. The show was choreographed to music, but we weren't able to hear it. The grand Finale was spectacular and lit up the sky for several minutes.
Posted by Ray and Cindy Warner at 2:03 PM