On to North Ranch 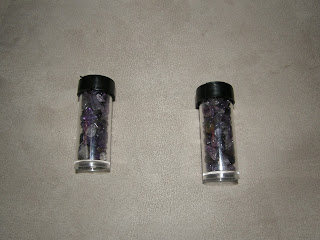 I have really had very poor internet, so was unable to post. Tuesday night we went on a night cache. The Quartzsite Cachers had placed reflective markers at about eye level on cactuses and trees especially for this event. You had to use a powerful light to see them. They were placed in a big circle with the spots about 75 feet apart. We went with a group, and it was a relatively warm evening, and everyone had a good time. They had a vial of what looks like a necklace with the string or wire taken out in the cache for everone. The small purple stones had a small hole in them, and this is what makes me think this. After I looked at them, I said “Oh No, not another hobby”.  A lot of the Boomers and geocachers did bead work, making necklaces and bracelets. 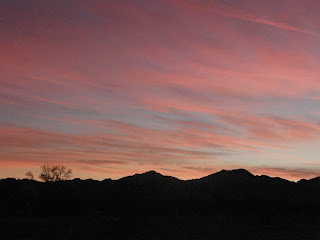 Wednesday after our morning get together, I decided to go with some of our new friend’s geocaching. What started out as a 3 ½ mile walk, ended up being a 5 mile walk and hike. We found three geocaches, one of which was very hard to see. It was a film canister down in a hole covered with rocks. It took about ½ hour to find it, because it was so small. We were gone about 4 hours. I found out how out of shape I am. Cindy stayed at the 5er and sewed all day because she said she was not up to a long hike, but she is working up to it. 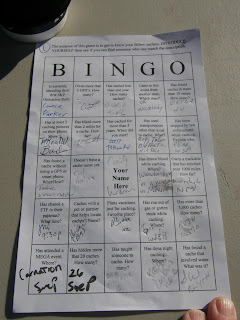 We played geocache BINGO in the morning   Guess what Cindy was the first one done and won a little prize. Cindy being forward--- can you believe!!

The group had pot luck at 4:30 with just what I needed, lots more food. There was so many different things, that as usual, I over ate. After that we went back to the trailer and watched a movie till bed time. I was quite sore from our walk. 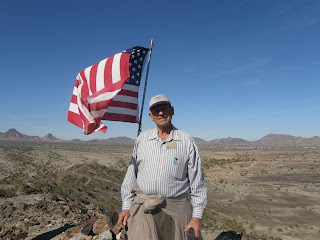 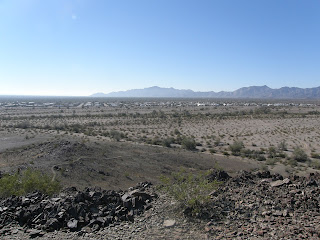 An old mine we found on our walk. 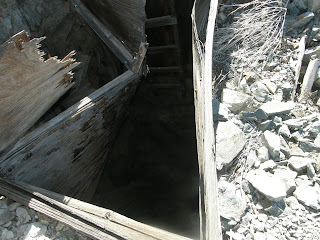 Do I have to go up there? 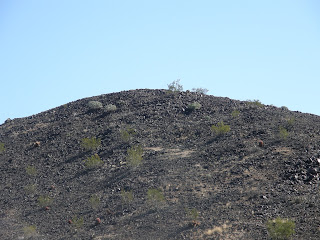 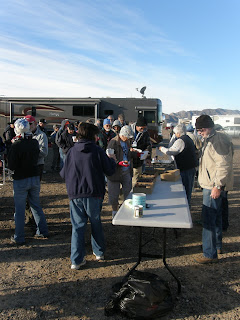 Thursday morning they had donuts for the group. I really am going to have to go on a diet after this last 3 weeks. After donuts, we loaded up and drove to North Ranch Escapees Park, by Congress. We have to dry camp, at least tonight because we were on the waiting list and they hold spots for the early registers. Hopefully they will have a site once all the Boot Camp people get here. Boot Camp starts at noon tomorrow, so I don’t know if I will have anything to post. 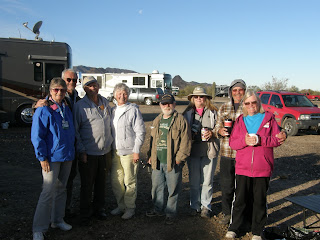 Saying good-by to our new friends.
Posted by Ray and Cindy Warner at 8:03 AM