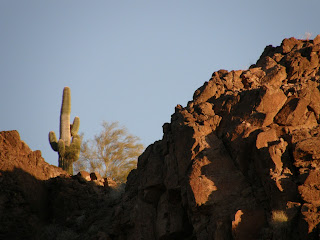 Yesterday we went to Wal-Mart to fill Cindy’s remaining meds. I think they finally got it right. We then went grocery shopping.

We went to a place by Parker, call Roadrunner
Floating Bar and Grill. They have a daily special for lunch. Friday’s special is all you can eat fish and chips. It came with 3 pieces of fish, tons of fries, cold slaw, and hush puppies. We both wanted another piece of fish, so Cindy ordered more fish and hush puppies. We both thought they would give us each a piece of fish and some hush puppies. But no, we each got 3 more pieces of fish. It was so much food, that we will be able to make another meal of it.

Today I walked a little and met some friends of Sandie andJim, Jan and Bill. They also have a Montana fifth wheel. We hope to meet Sandie and Jim while we are in the Phoenix area. 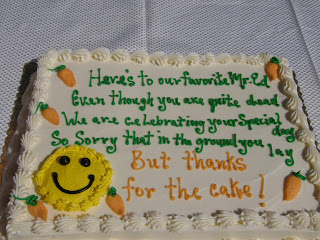 At noon today everyone had pitch-in for lunch, to celebrate Ed’s birthday. Actually the party is for Duane, but it seems his wife went to get a cake at one of the local bakery’s, and they had one they had made for a man named Ed. His family had not picked it up because Ed had died. They offered it to her for half price, and she couldn't turn down a good deal. The next year, as a joke everyone sang happy birthday to Ed on Duane’s birthday. From what Duane told me, one large cloud went over and it started to rain and hail. As they were finishing singing a large bolt of lightning came from the cloud. After that the sun came back out and it cleared up.  Someone said Ed was either angry, or was helping them celebrate, so the last 4 or 5 years they have celebrated Ed’s birthday at The Steps. After we sang Happy Birthday, everyone sang the theme song from the old TV show, Mr. Ed. I think everyone had a good time and got plenty to eat.
This afternoon we are going to see the fireworks at SARA Park and I will report on that later. 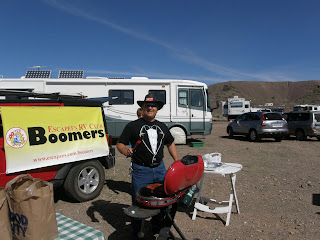 The birthday boy!
Posted by Ray and Cindy Warner at 1:47 PM