Yesterday I took the trailer tires to Les Schwab's to have metal stems put in in place of the rubber ones that were there. The one I had replaced in Portland made me kind of leary of driving any more with the rubber ones. I had put the 1st one in  the back of the truck, and when I went to put it on, the tire was flat. I pumped up the tire and checked to see where it was leaking, and it was the new stem. I was planning on paying for 3 more stems, but when they got through, they told me that since I had trouble with the original one, the other three were no charge. It is kind of hard to beat that kind of service.

I also replaced the wire going through the axle that had been showing short on my brake controller. When I looked at the old wire, there was a place that was rubbed through all the insulation, and the wire came out damp. After I replaced the wire, I hooked up the end that I was able to, and hooked the truck to the trailer, the short was gone. Now all I'm waiting for is the new brake assembly that is supposed to be here Thursday. Then we will be ready to go again. 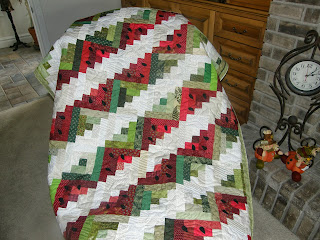 I finished one of Cindy's picnic quilts. It is a watermelon log cabin quilt with seeds sewn on. The pattern has picnic baskets and watermelons on it. I hope you can see them. 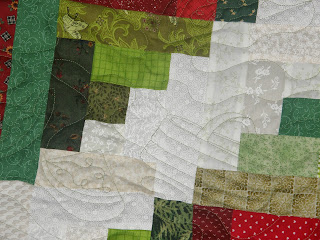 Today I wanted to repair a motion sensor light I had put on the fiver that had never worked. When I turned on the switch that was supposed to give a constant light, all I got was the blue light that said it was working, but no light. I took it back to Camping World and had them check it. When he put another light in it, it came on. So we had a bad bulb. Rather than give me a light bulb that cost about $27.00, he said that since it had been so long, that he would give me a whole assembly, and send it back to the factory. I was supposed to do something about it within 30 days, but since we were going to Alaska, I didn't make it. There is a one year guarantee on it, but I'm supposed to send it back, not them. But to make me happy they were willing to do so. Another example of good custom service. Two days in a row, wow! I told him I didn't need the box or new instructions, and he said it would make it easier for them.

Today we were going to go up the canyon, but got a call from our daughter asking if we could go over to our grand-daughters school and pick her up. She had been acting up in school and they couldn't control her. She has some emotional problems which she is being tested for. She is only in the first grade. Since we have been home she has been to school for two days, and Cindy is really getting weary trying to take care of her all day. Anyway, our plans for the day were kind of shot down. Tomorrow, we are going to do something else!

I'm getting anxious to leave again, but Cindy wants me to do some more quilting before we leave. I'm only 18 or so behind. What's the big hurry. lol

Posted by Ray and Cindy Warner at 2:24 PM