Too Close For Comfort

Last night we were watching TV and there was a little lightning we could see in the clouds, when all at once there was a bright light and immediately a loud boom. Then the trailer shook. The lightning had hit in a grove of trees which are only about 100 feet from us. I was so nervous about the lightning, that I lowered our antenna. All the power was still on, so I guess there was no damage. We didn't have any other strikes, but it was kind of unnerving.

Today is a lot cooler than yesterday and it has rained off and on most of the day.

We decided to go see Mount Rushmore anyway. Our RV Park is right behind of Old McDonald's Petting Zoo. On the way out Cindy got some pictures of some goats on some kind of aerial ramp that has been built for the goats to climb on to eat. We both thought it was kind of neat. 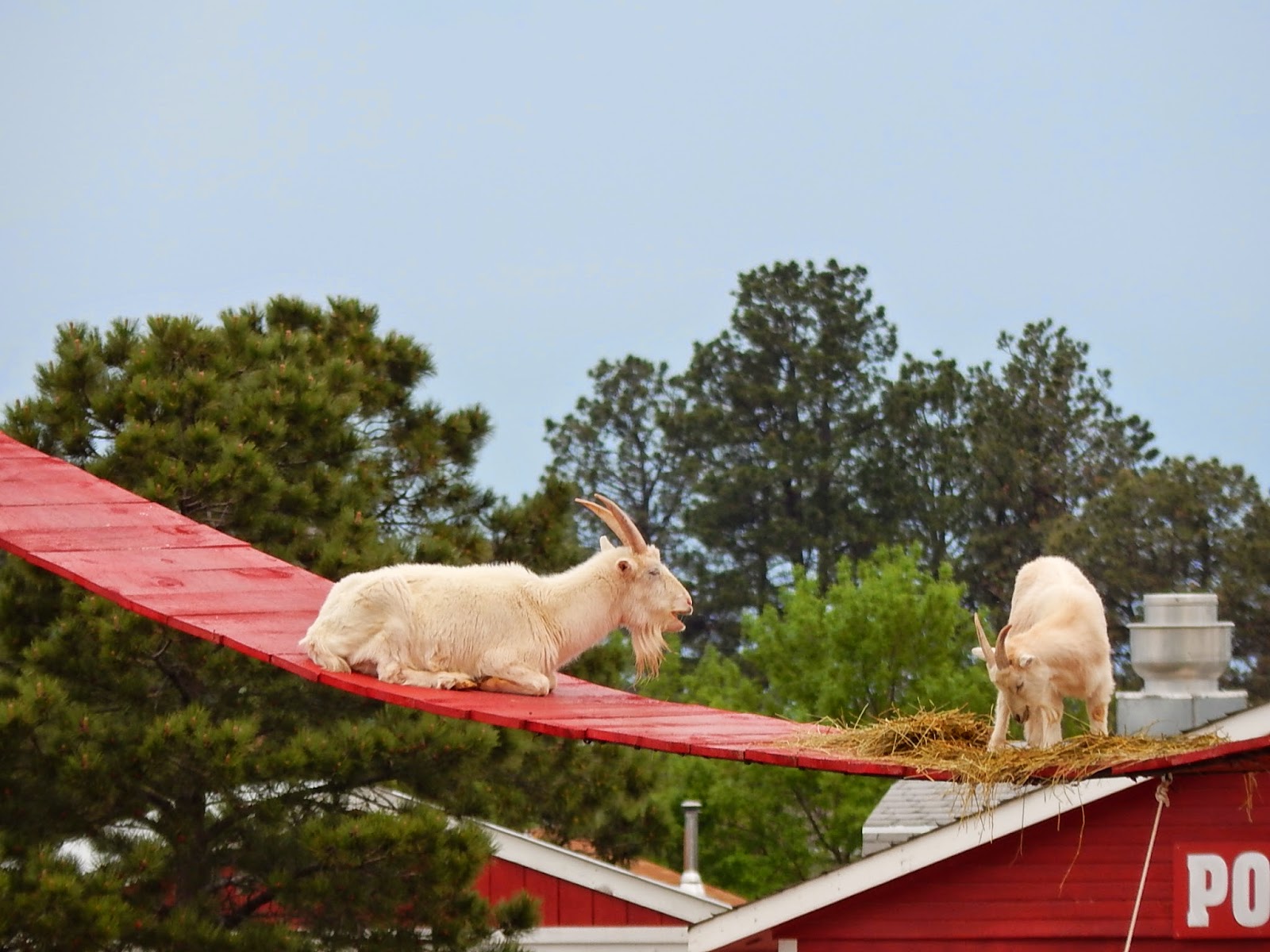 We then went to see Mount Rushmore. The history of the Monument is very interesting. While we were there we watched a short movie about the history of the building. It took 17 years to build and originally the design looked like they planned on having more of the presidents bodies carved in the mountain. I saw one sign that said that if the original planners had known how big and hard a project it was going to be, that the project probably would never have been started. The original artist died before the Monument was completed, and his son had to finish it. The film was very informative and is well worth watching if you ever go to see Mount Rushmore. 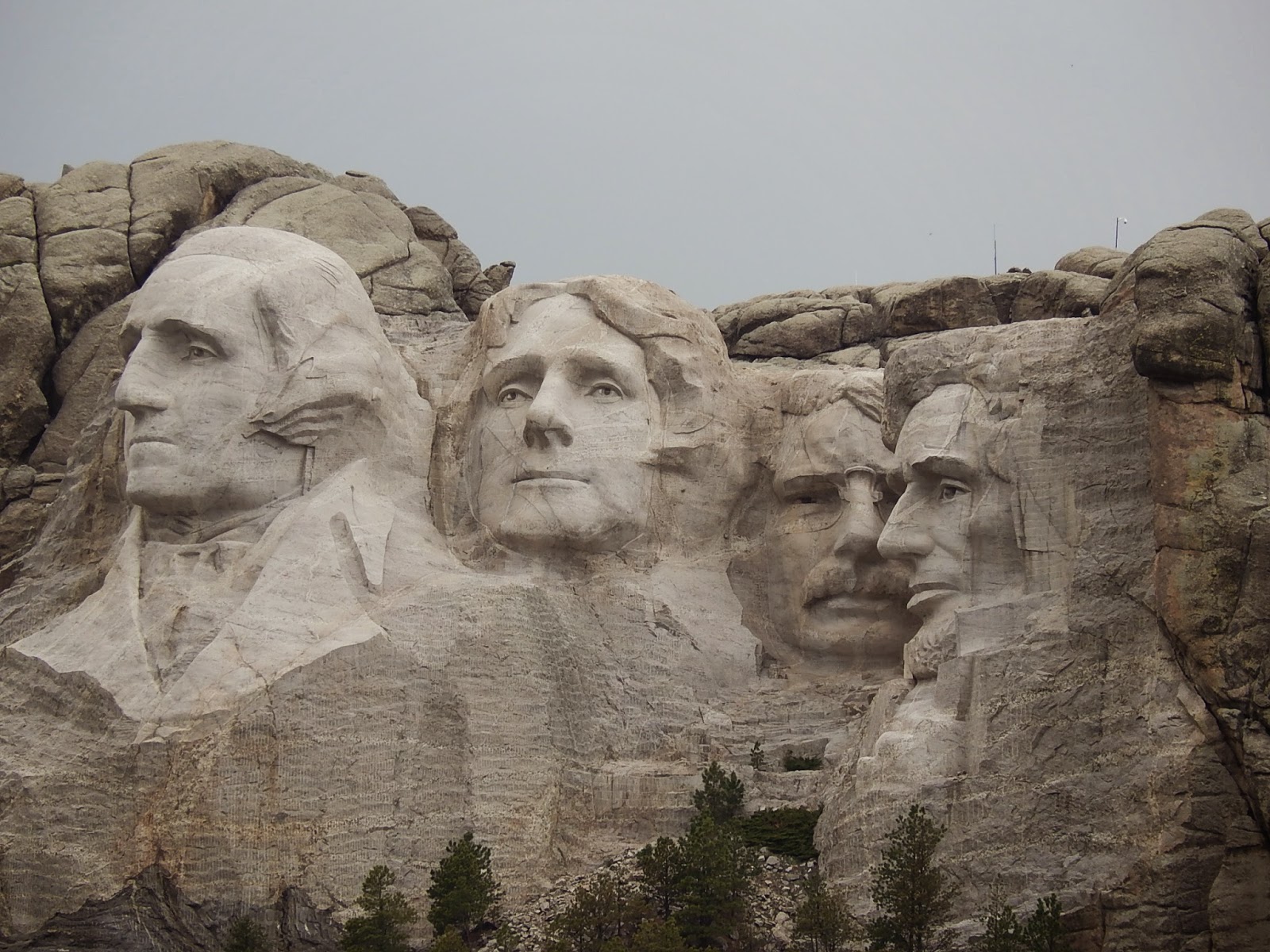 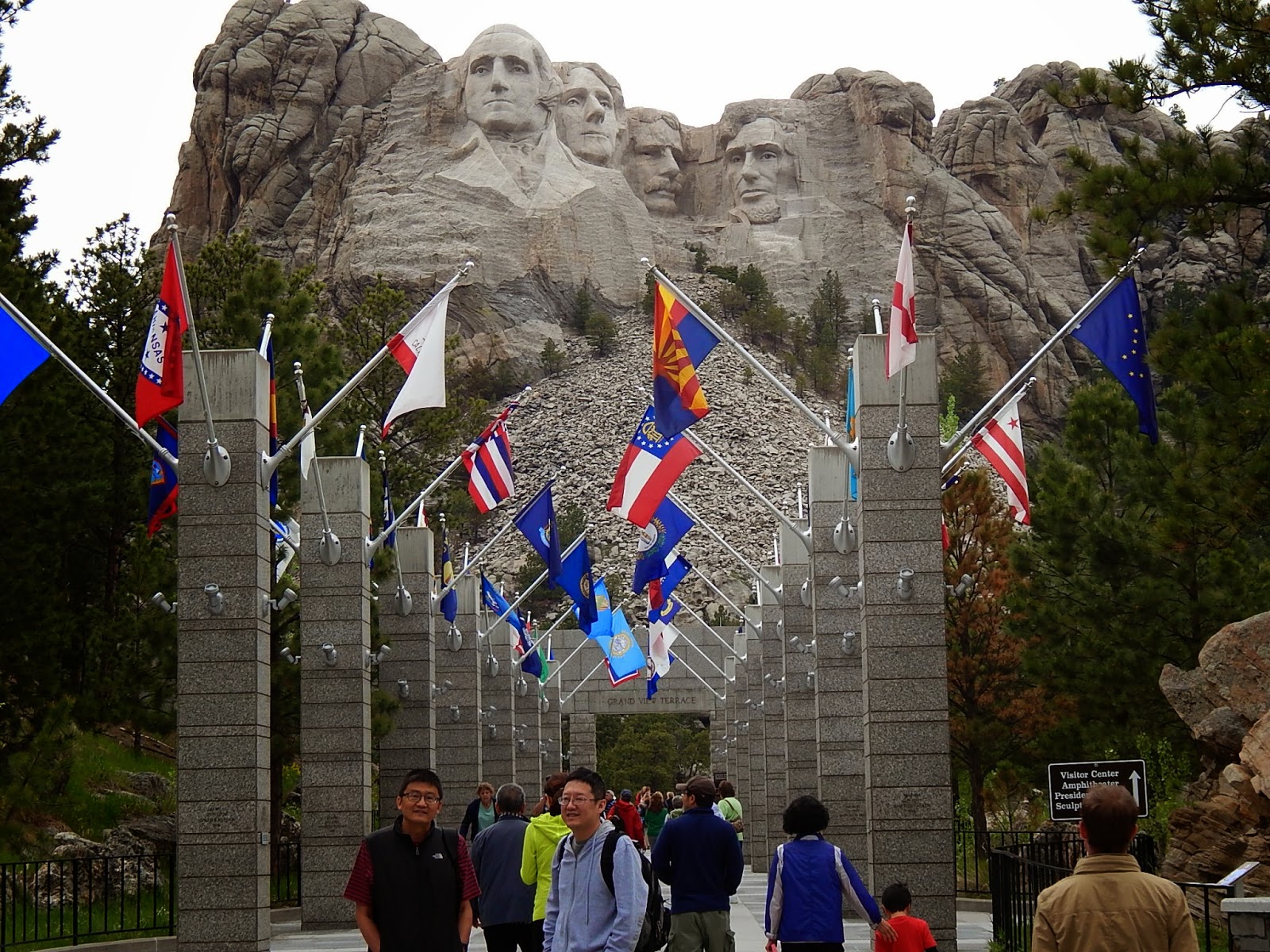 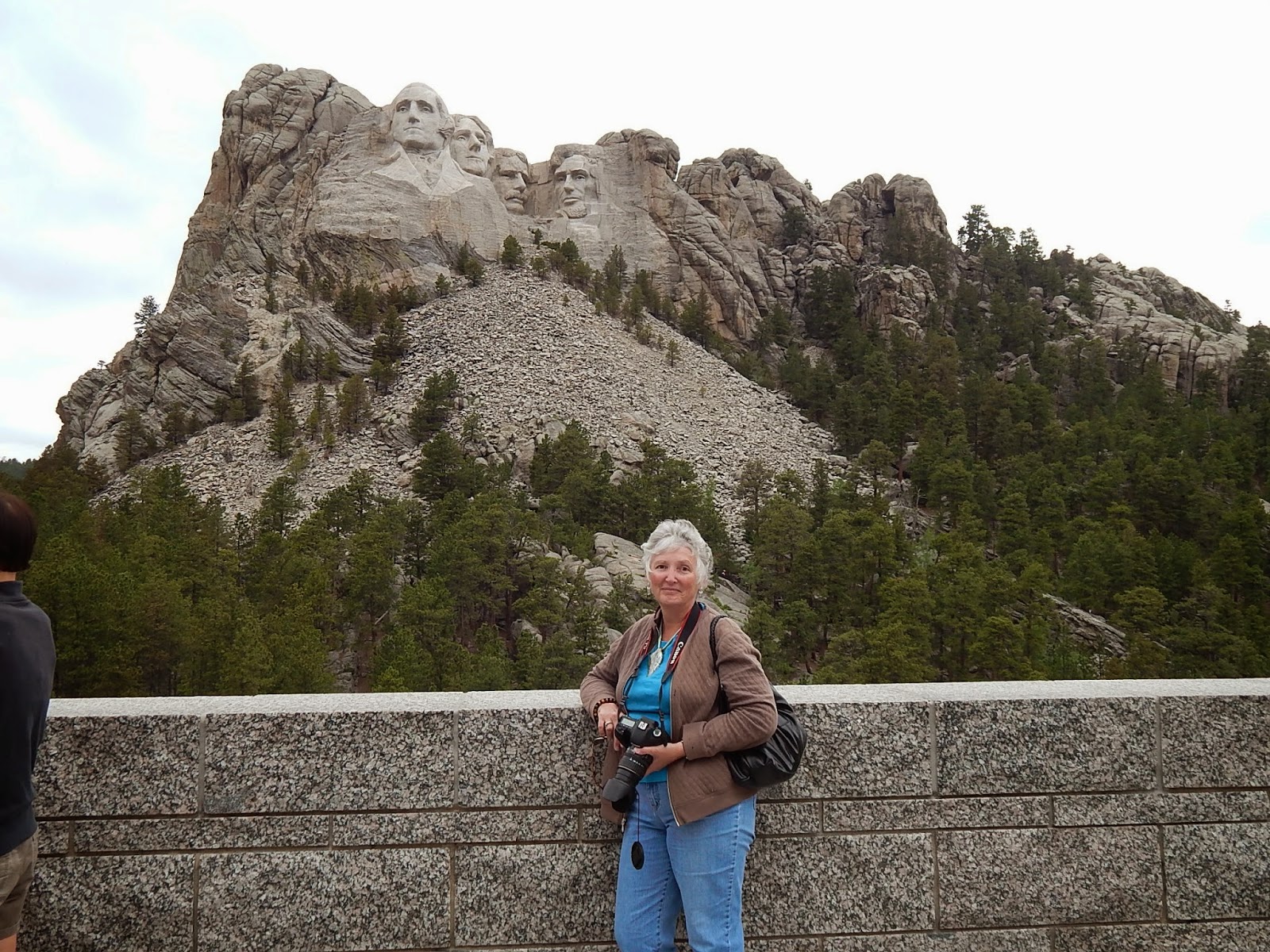 There was a display with the US Flag that was used at the Grand Opening. Each star measured 27 inches. The total size of the flag was 39 feet by 67 feet. It was considered to be the largest flag in the world at that time. There are many more exhibits that tell about the construction. 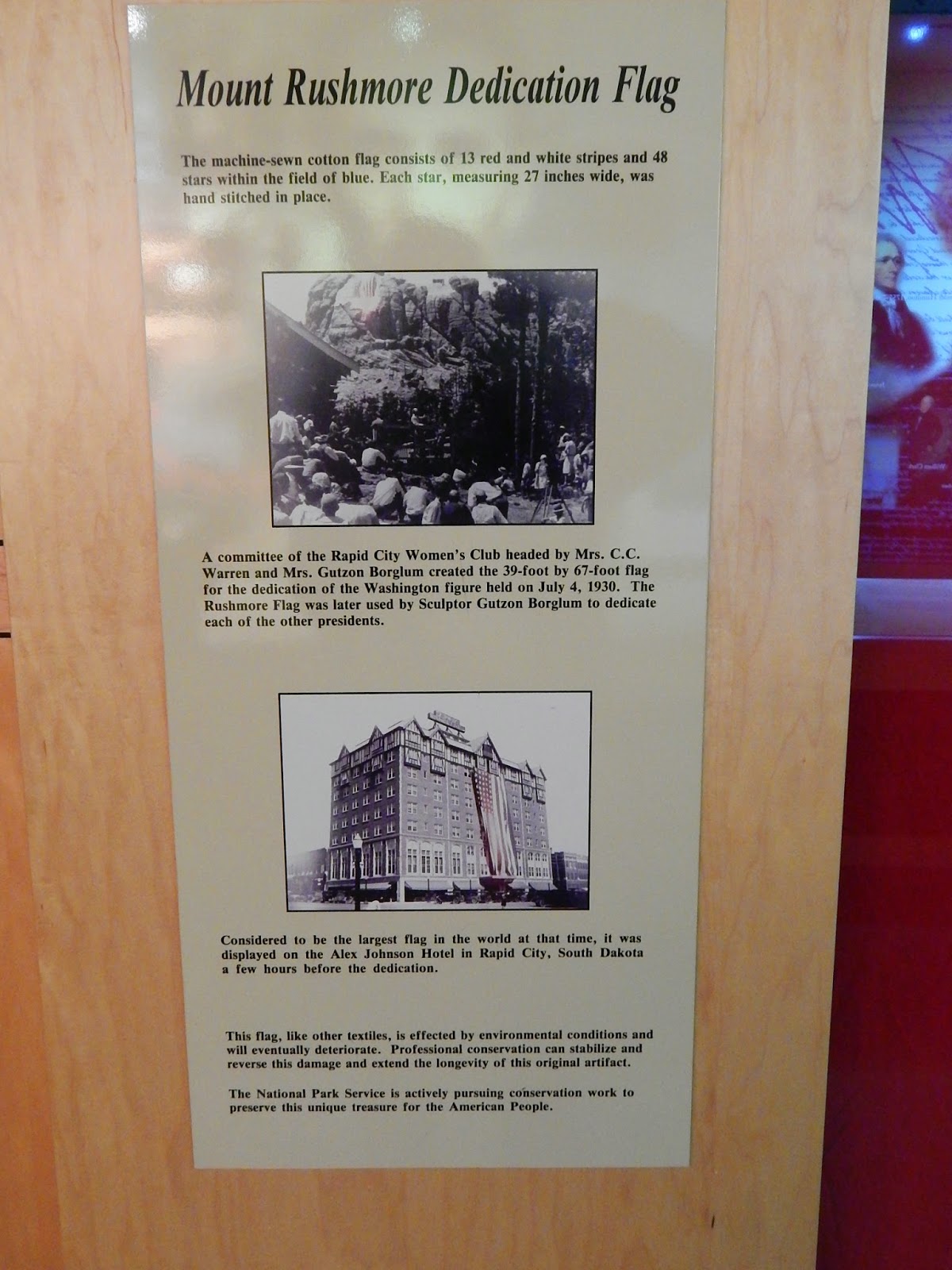 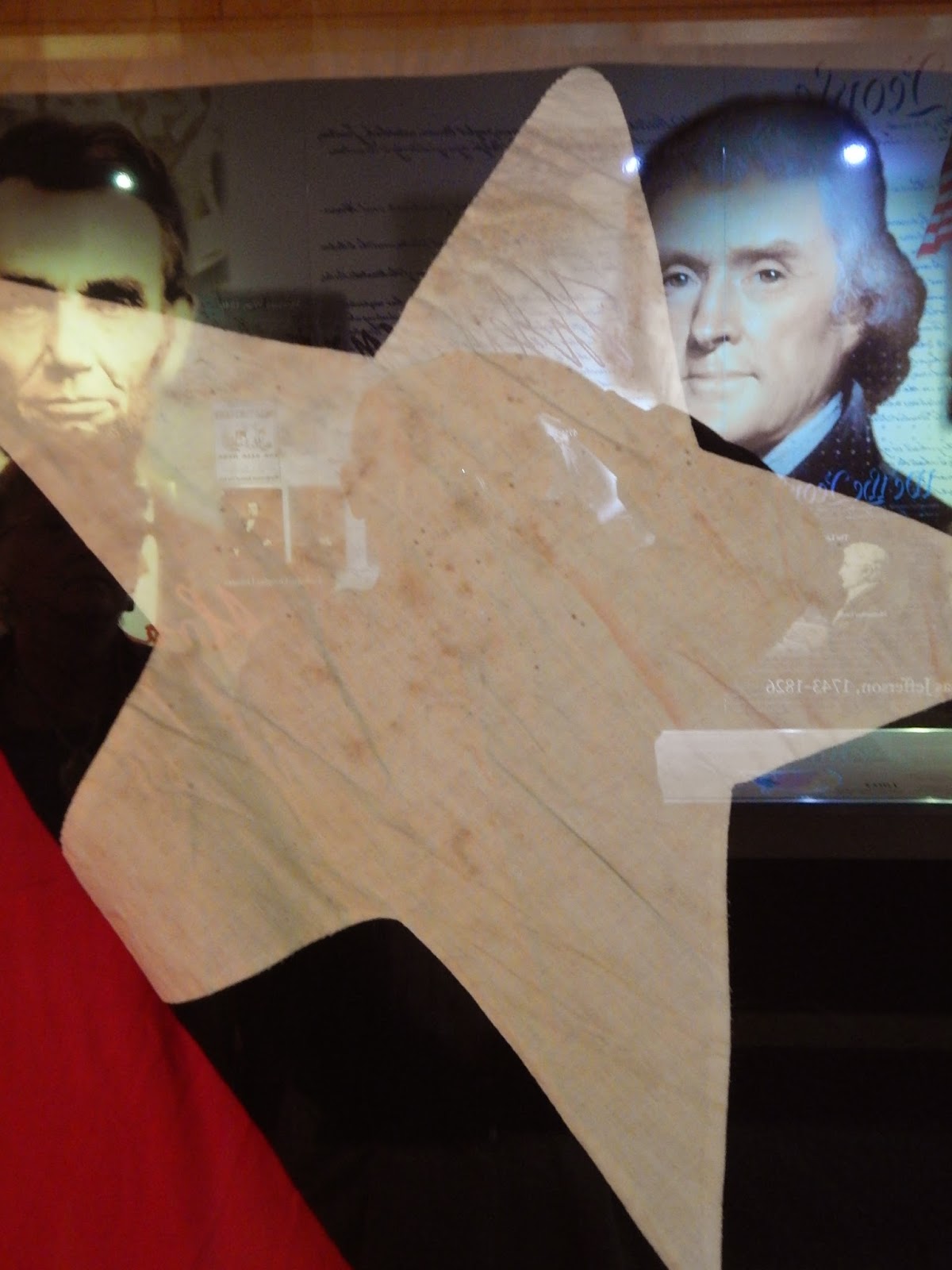 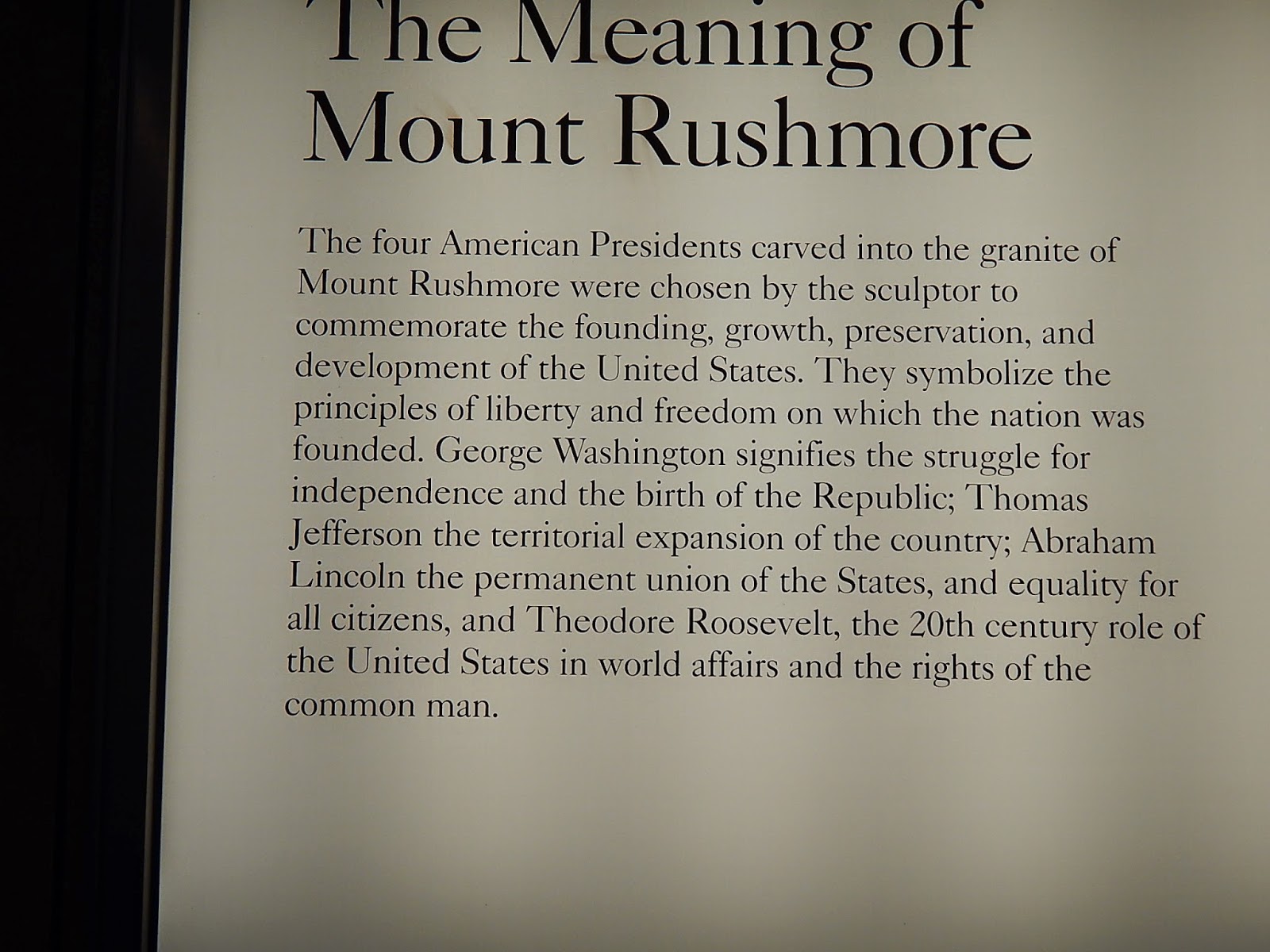 After we left the Monument, there is a turnoff where you can see Washington in profile. We thought it was worth a few minutes stop.

We then went toward the Crazy Horse Memorial. On the way there is a little lake that has a nice view. I have put one picture of the lake on this post. 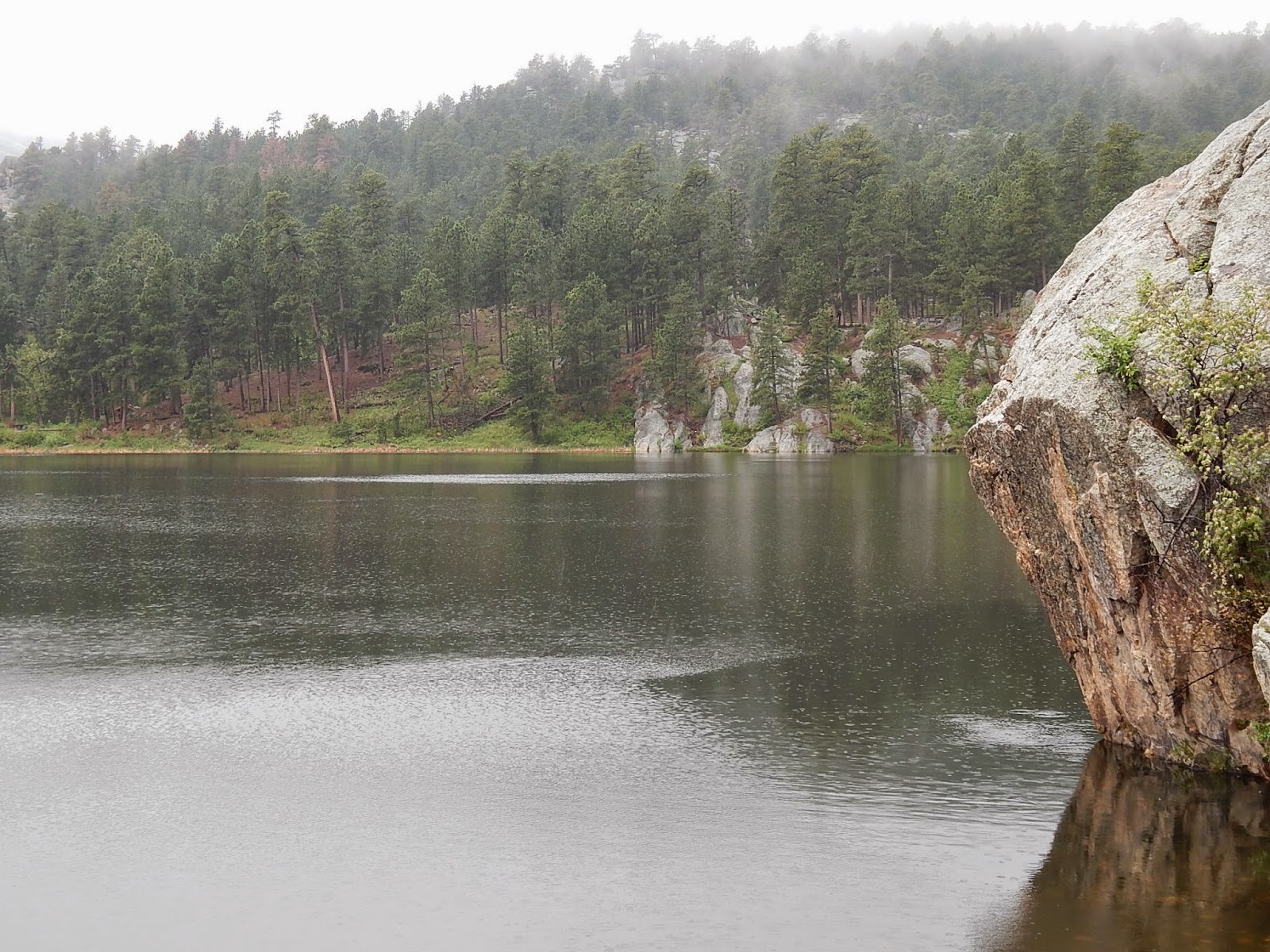 We had already seen the Crazy Horse Memorial, and since it was raining, we decided to just take a few more pictures and not pay the $22.00 it would have cost us to go to the actual visitor’s center. It has been almost 10 years since we were here last and they are now working on the horse Crazy Horse is sitting on. They have kind of marked out the horse’s head will be and you can see that in the pictures. 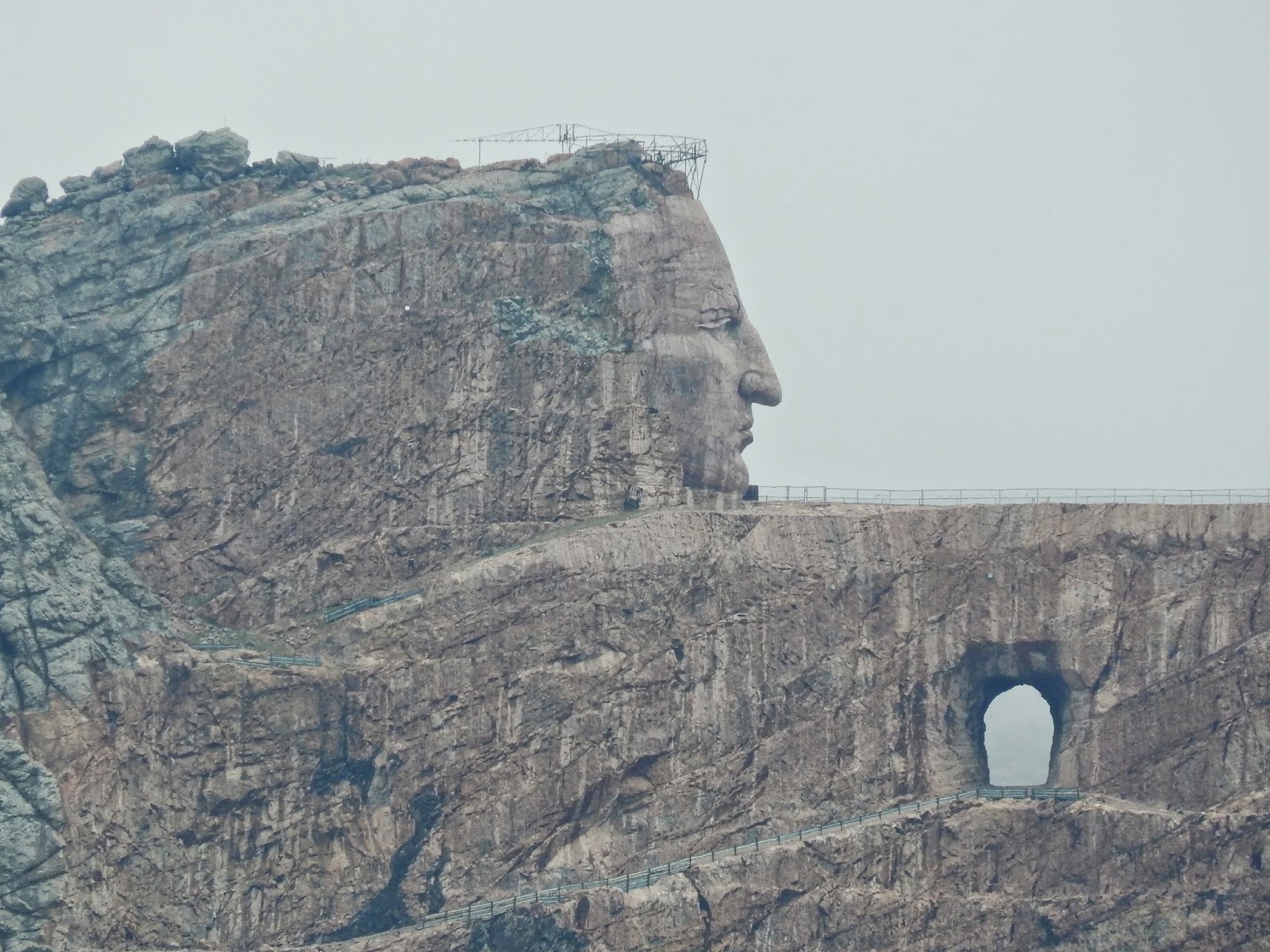 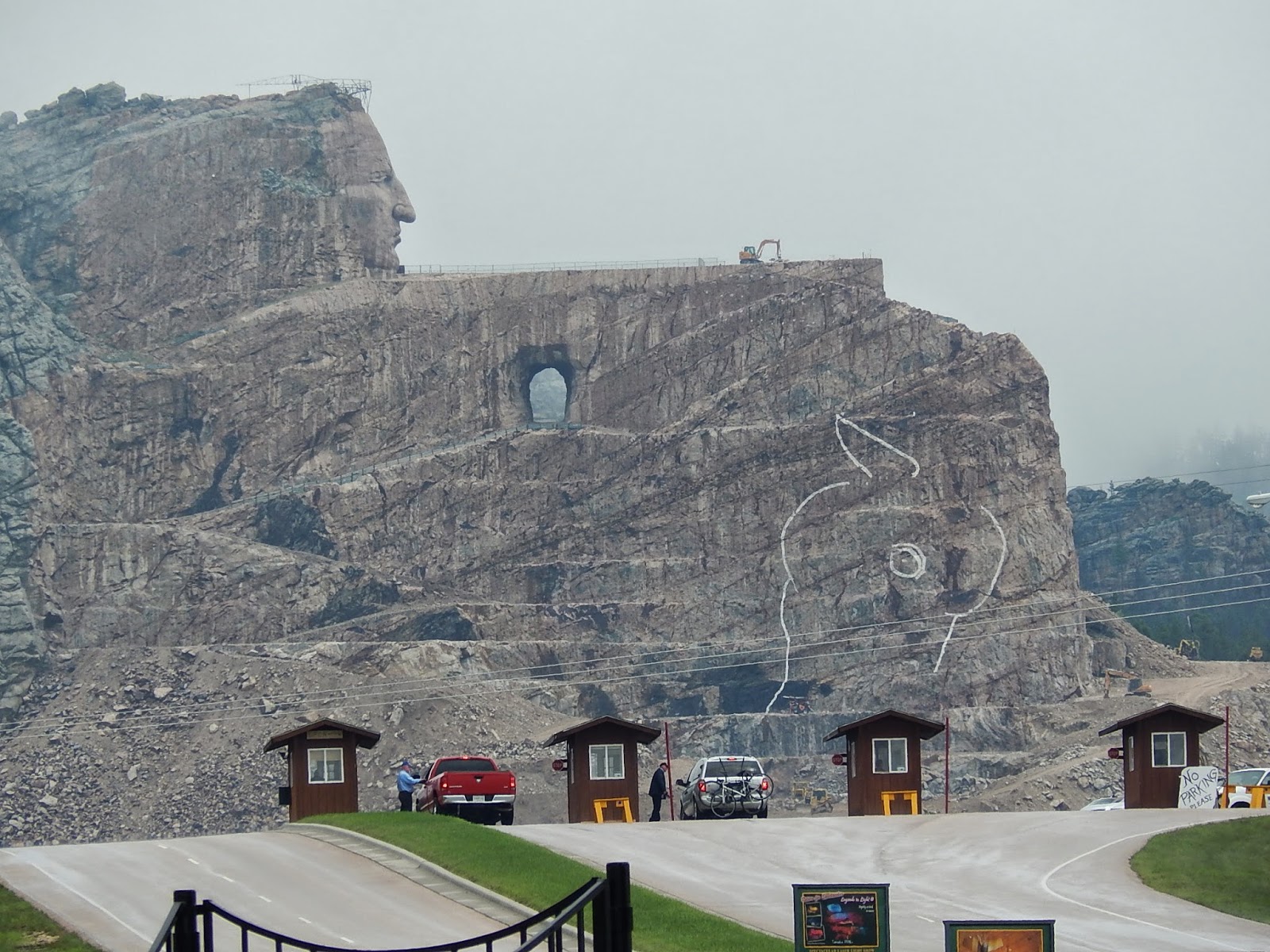 We drove to Hill City (to check out another quilt store. On the main street across from the quilt store is an art gallery. They have some statues that look like they have been made and welded out of junk. 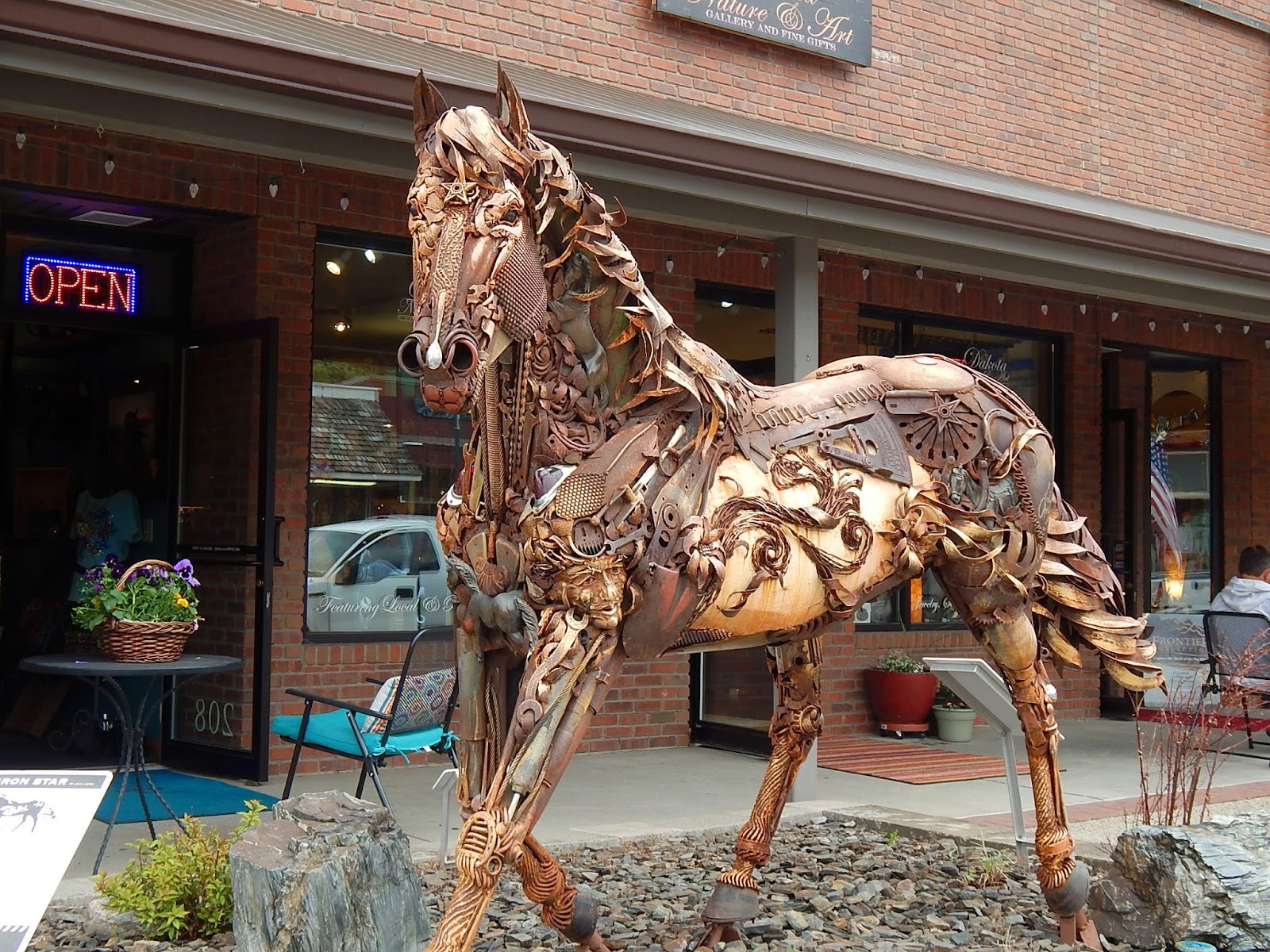 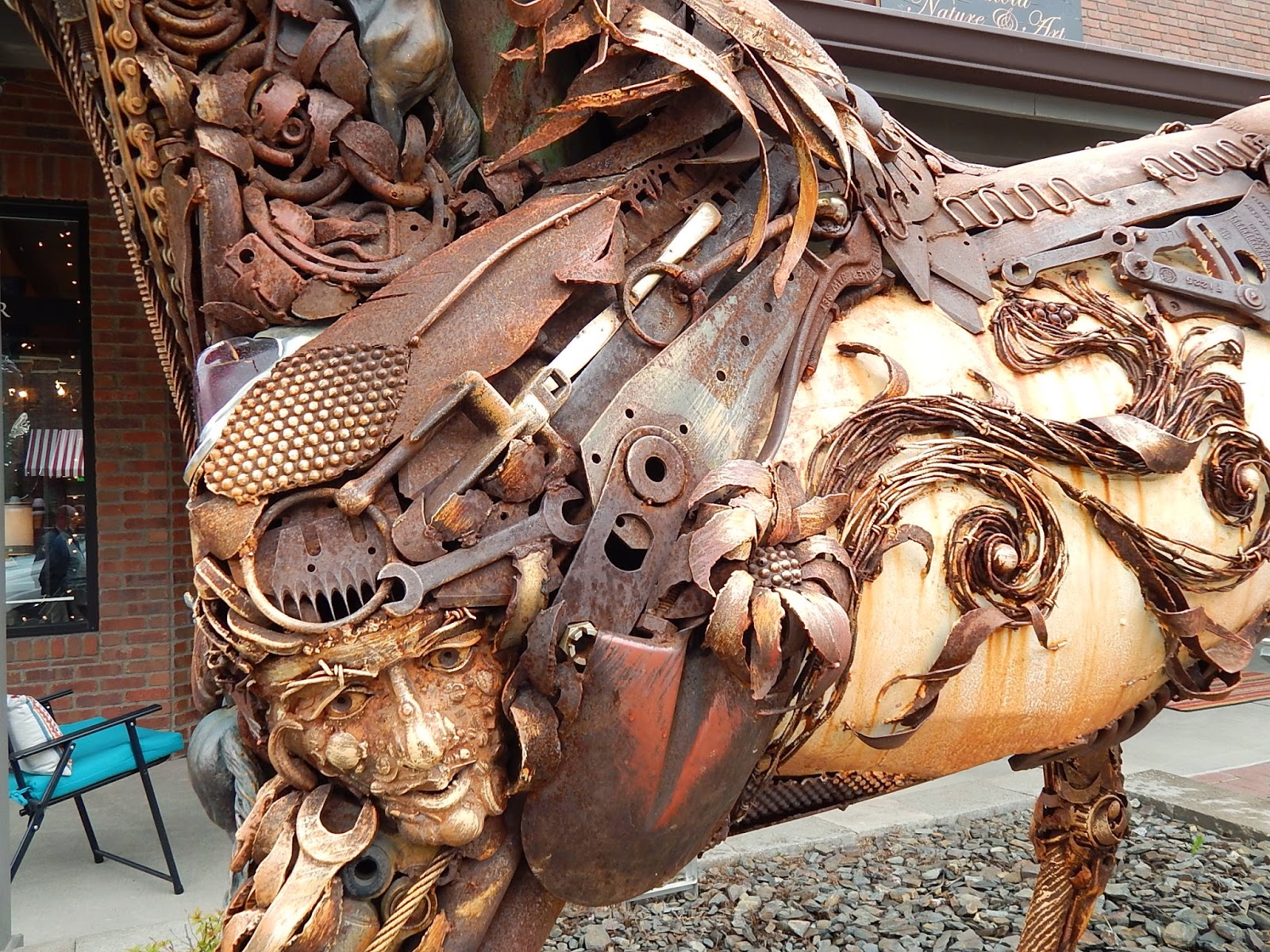 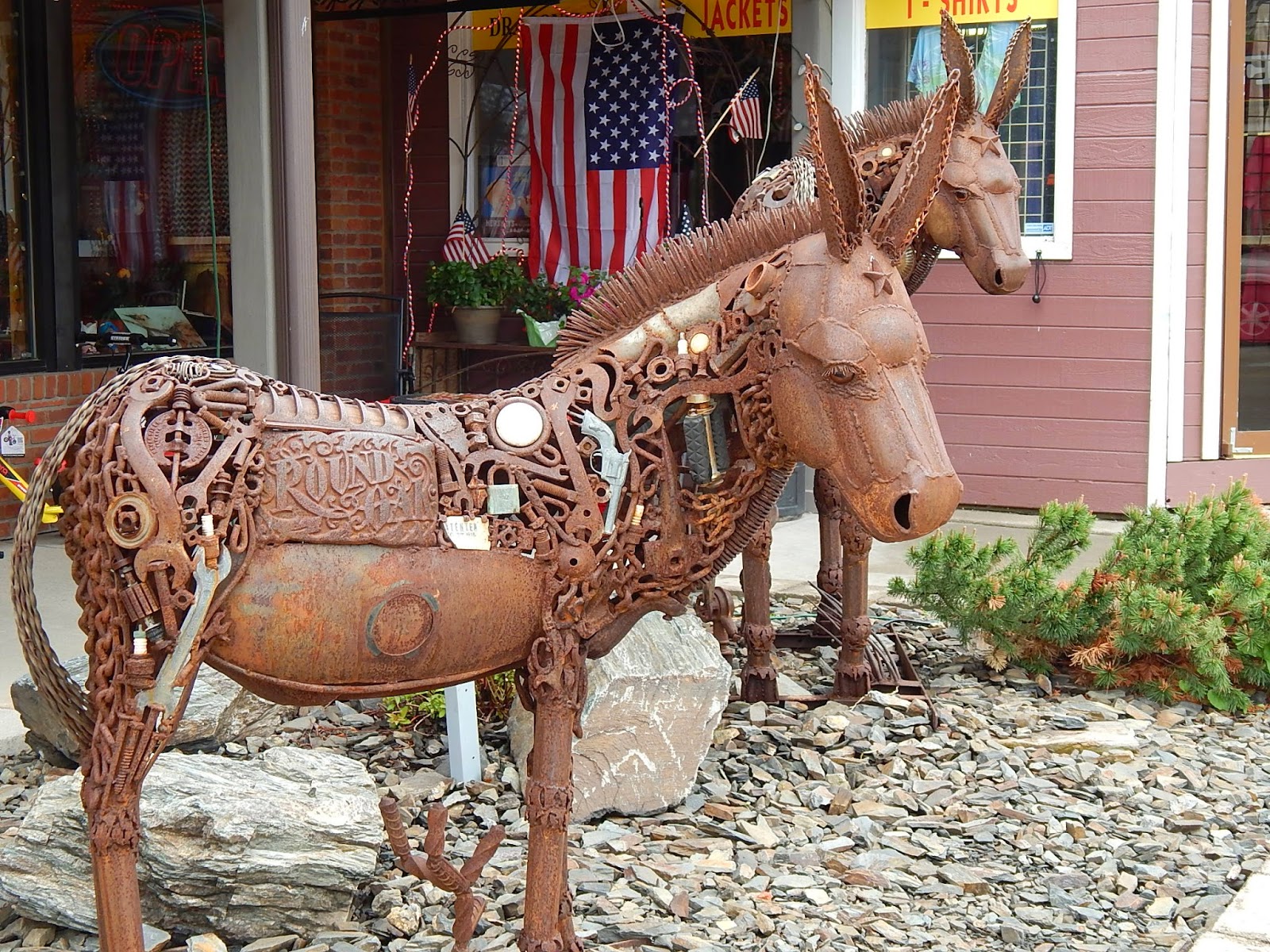 Jan of Bill and Jan RVing the USA had suggested we try a pizza from Lintz Brother’s Pizza in Hermosa. We got the Supreme and it was very good. Thanks Jan for the recommendation. We have enough left for at least one more large meal. 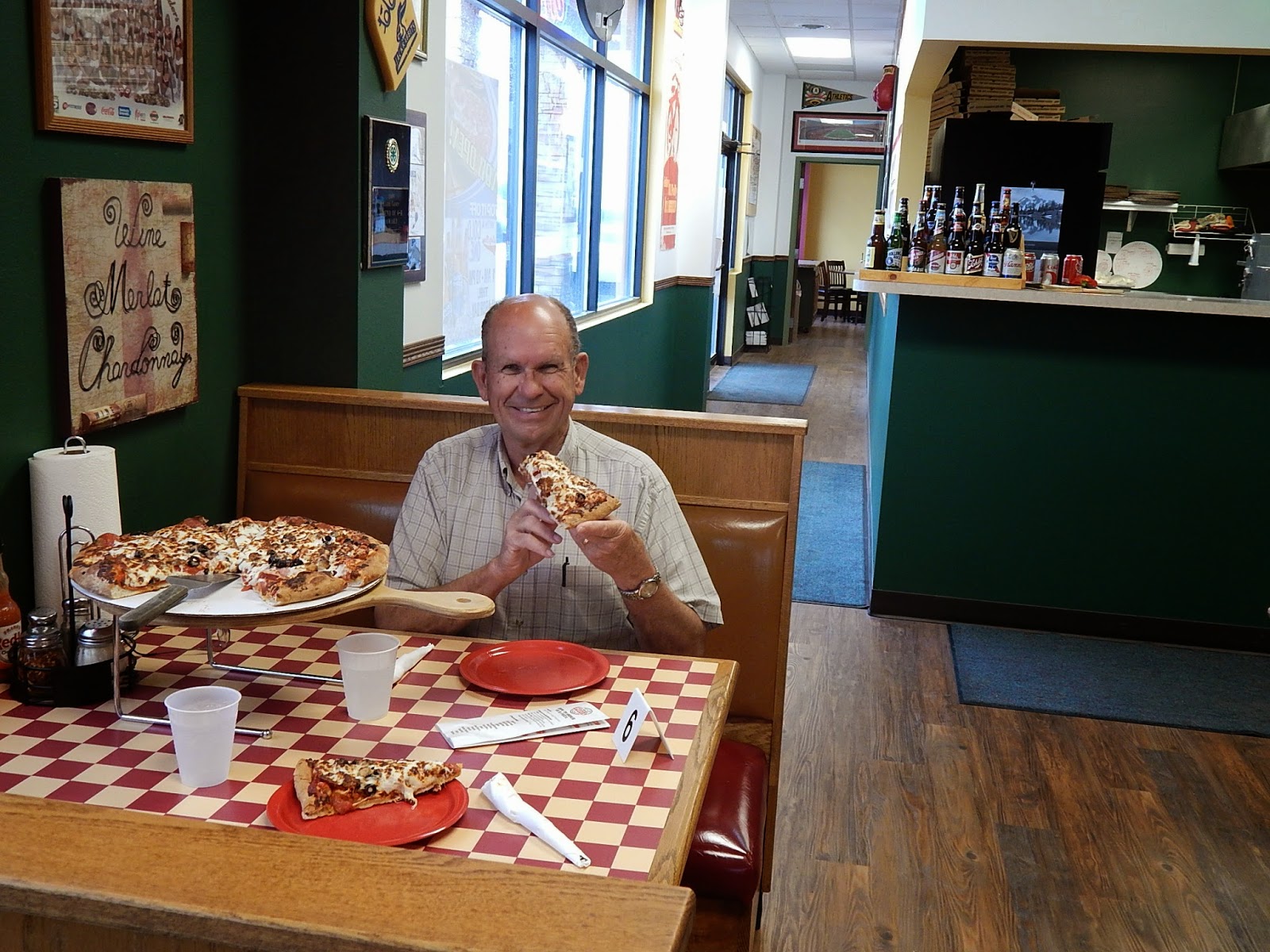 It finally stopped raining at about 5:00 this afternoon, but the weather guessers are saying more tomorrow.

Thanks for visiting.
Posted by Ray and Cindy Warner at 4:58 PM