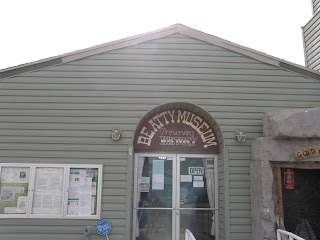 It was a lot cooler today than the previous week. The wind blew hard all night. We decided to go see Beatty and the ghost town Rhyolite. Our first stop was the Beatty Museum. There were many artifacts there including an organ that was originally in Scotty’s Castle. It was a small museum, but had a lot of history in it. The attendant was very helpful, and gave us literature on Rhyolite, and a brochure about the Goldwell open air museum, which we would be passing on the way to Rhyolite.

The Goldwell museum is all outside, and depicts various themes, by several different artists. One of the representations was called the Last Supper. Another shows the same type figure over a bicycle. There was a large stone couch. The museum was right next to Rhyolite, and was worth a stop. 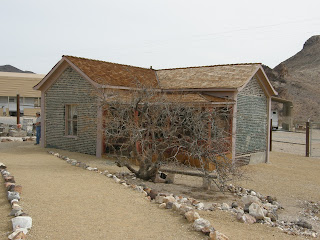 Cindy had heard about the bottle house and wanted to see it. It seemed to be one of the better preserved structures. There was a mercantile building, two banks, and even the remains of a school.

There is a large building totally surrounded by chain-link fence, which we found out started out as the train depot. The sign on it said Casino.

We found the old city jail and the jail portion was all there, while the front had no roof. There was another small building that had a sign in the window that said Brothel. It was two rooms, with no back door. The roof seemed to have copper shingles on it and was well preserved, except for the missing door and part of the floor was gone.

It was interesting that the most intact buildings were the train depot, the jail, and the brothel. There were many partial remains, and parts of buildings. There was even a grave site which said the woman buried there had died in 1908. We could see, what looked like a mine on the hill above the grave.


We had wanted to see Scotty’s Castle, but we will have to go there another time. I guess this gives us a reason to come back to the area. After we left Rhyolite, we drove back to Pahrump in time for a half price buffet at one of the casino’s. It was good, but I ate too much.

Posted by Ray and Cindy Warner at 7:58 PM