We went to the ghost town of Grafton. I guess we like to see ghost towns. The first stop was the old cemetery. There were a lot of readable tombstones. There was on headstone with the names of 2 brothers and the wife of one of them. They were all killed on the same day by Indians. There was a monument that said the cemetery and some of the town were restored in 2004. The cemetery was interesting.

Next we went to the town site. The first building we saw was once the school and on Sundays, the church. There was a sign in the window telling that in 1930 a movie was filmed using the building. They had also built a saloon next door for the movie. Two of the houses had been partially restored. We could go into one of them. Across the road was another log cabin. It looked like it had never been restored, but we couldn't be sure. There also was an old barn, but we couldn't get very close to it. According to the signs, the last people to live in the town left in 1945. 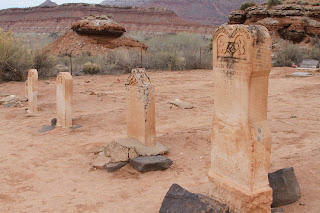 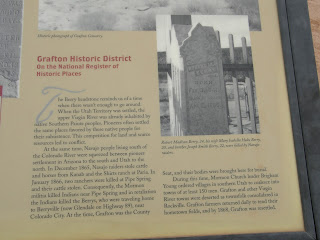 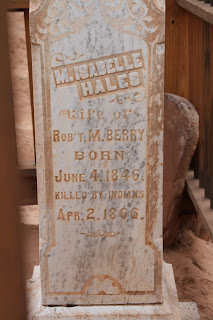 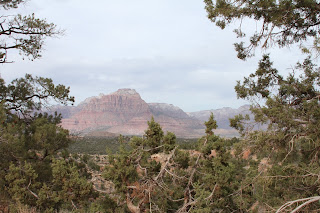 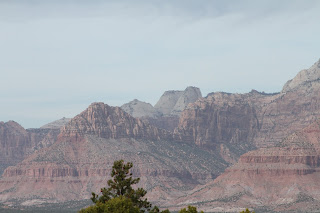 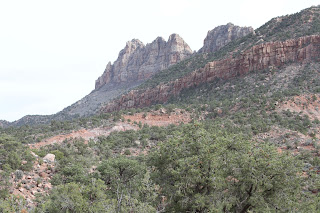 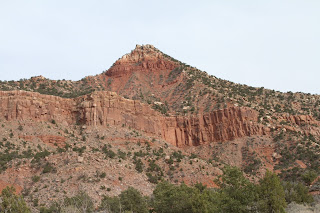 I had read about a scenic road that went from Rockville to Apple Valley. I decided to try it. The Road was so rough and steep, that Cindy didn't want to go on it. I didn't really have anywhere to turn around, so we kept going. After a while we could see Zion’s and we got some nice pictures. By then the road wasn't quite as bad, and I told Cindy that we hadn't had to put the truck into 4 wheel drive, so it wasn't too bad. To be honest, I was sorry we had taken the road for a ways, but we did get some nice pictures. Once we got on top the road was fairly smooth and got a lot better. I definitely would not recommend a car trying to go over it.
Posted by Ray and Cindy Warner at 7:28 AM