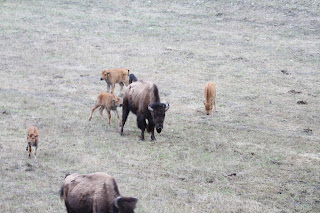 We left Liard Hot Springs early this morning with the hopes of seeing some animals. Boy, did we ever see animals. There were many herds of buffalo. On herd had 4 babies with three mothers. We also saw lots of beautiful scenery. 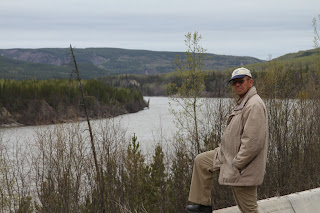 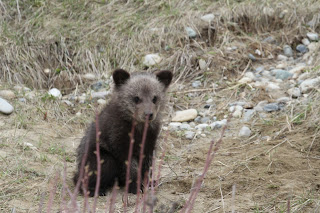 As we drove along, we saw what I thought were ravens in the road, but they ended up being two bear cubs. They scurried down the embankment and his in a culvert before Cindy could get a picture of them. I stopped where they were hiding and turned the truck off. They kept sticking their heads out, but every time a truck or camper went by, they went back in the culvert. We could hear them crying for their mother but never saw her. Cindy wanted to out wait them and see if she could get a picture. Our vigilance was finally rewarded and they came out of the culvert. 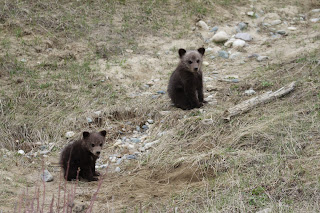 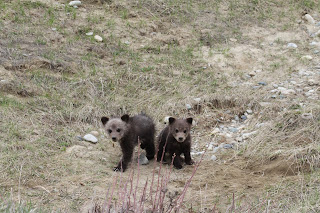 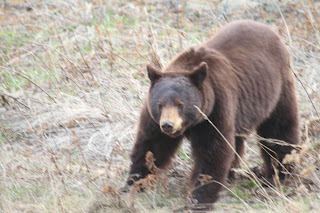 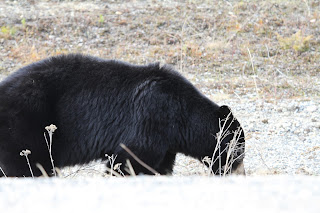 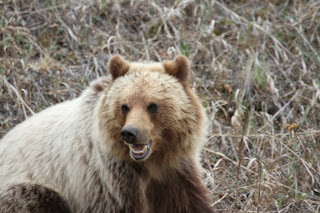 As we drove on, we saw several more black bears. We also saw, what we were told later, two Grizzly bear cubs. When I filled with diesel, the attendant told me that the same two cubs had been as far as his station, and they were 3 years old. They didn't seem to be very afraid of us, but we didn't get out of the truck.

The filling station was about 15 miles from where we saw the two large cubs, and he said they had a very long range. We put in $380.00 worth of fuel. It work out to be about $5.35 per gallon. We drove 127 miles, and with all the stops, it only took 4 hours.We did stop a lot. of course waiting for the cubs made it worth it. 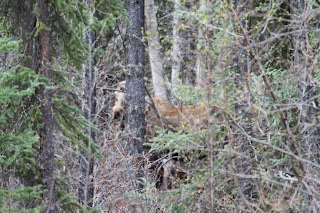 We also saw one moose, but he (or she) wouldn't stay by the road, so we only got one shot through the woods. It's not a very good picture, but I included it. 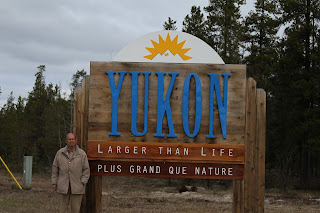 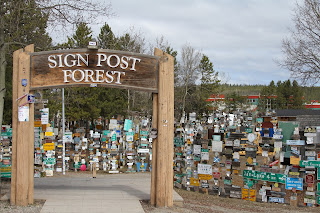 After we got to Watson Lake, we stopped at the Sign Post Forest and looked around for a while. I finally found a spot to put up the sign Riverton City had given me. Because it didn't say Riverton, Utah, I also put a Utah License plate in the middle of it. As you can see from the picture the first sign was put up by a lonely GI while building the highway. 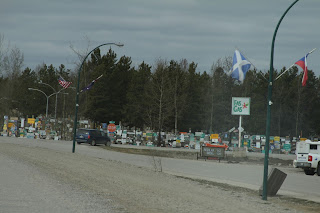 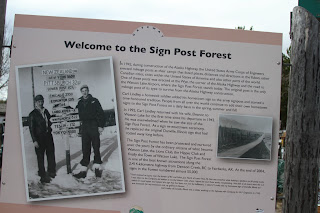 Inside the visitor center there is a display that shows the same man returning to Watson Lake in 1996 and about a ceremony and a new sign. 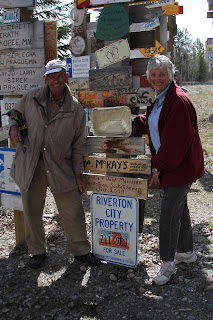 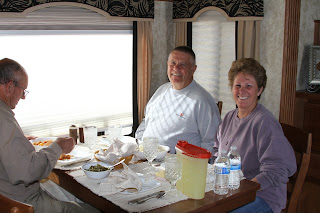 We were getting ready to watch a movie about the construction of the Alcan Highway, and our friends from home, Eddie and Barbara walked out of the theater. They had come up the other way from Washington and we were planning on meeting up with them somewhere in Alaska.They thought we were probably way ahead of them, but we haven't been in any hurry, so they arrived here yesterday ahead of us. They were staying at the RV Park in town, so we decided to pay the price, and get some laundry done. We invited them over for dinner, and are going to travel with them to Skagway, Alaska. We decided to go there first because the ferry in Dawson City is still not open, and by going to Skagway first, hopefully the ferry and Top of the World highway will be open when we get there. 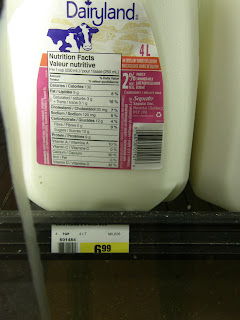 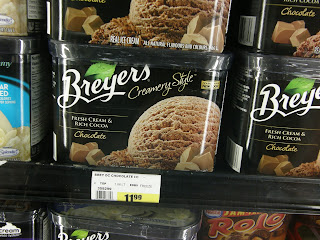 This little lake is by the RV Park.


The visitor center has a dollar off coupon for the Northern Light Center. 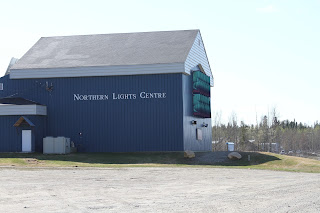 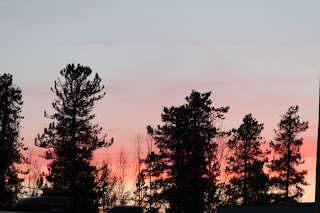 And last, here is a picture Cindy took of the sunset at 11:30 at night.

Posted by Ray and Cindy Warner at 8:06 AM