Today we drove from Hinton, Alberta to Dawson Creek, British Columbia. We were going to stop at Grande Prairie, but it was only 1:30, so we decided to go on to Dawson Creek. We did make a fuel stop in Grande Prairie. Diesel was $1.179 per liter. This figures to be $4.48 per gallon. We bought $113.00 worth. 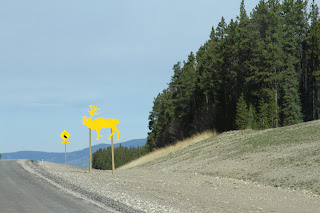 We had already decided to go on Highway 40 to Grande Prairie. It was in the foothills and was very pretty. There was a lot of up and down, so I don’t think I got that good of mileage. Part of the way there were Caribou crossing signs, but we didn't see any caribou, and I remarked to Cindy, they keep promising we will see caribou, but we haven’t seen any. We finally looked ahead and there was a stopped camper, and a caribou crossed the road. Cindy almost missed the shot before it ran into the forest. We saw several deer, but didn't get any pictures. Unless you count the Beaver that was all the wild life we saw today. 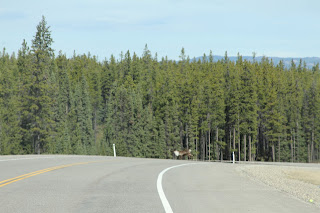 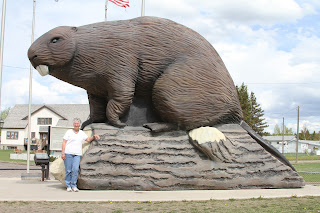 We stopped at Beaverlodge and took some pictures with the giant beaver. Across the street from the beaver, there is a Tourist Center  They had an interesting art display, and a wall covered with stained glass panels. They had an elegant tea room, and they offered us coffee or tea, but as we don’t drink either, we had to decline. We felt that this was worth a stop. The Centre was the town hospital, and was slated for demolition. Several of the town people wanted to save the building and were able to do so. 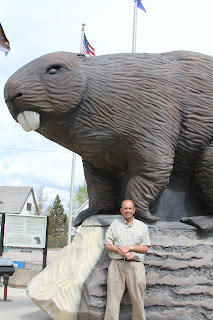 We got to Dawson Creek at about 4:30 which was 3:30 their time, and after we got the 5er parked, we went to the Visitor Center here. We went to see the large sign that proclaims “You are now entering the World Famous Alaska Highway”. We also walked to the Mile 0 marker in the middle of the street. Cindy said we finally made it to the start of the Alaska Highway. On the Traffic Circle there is a statue as a tribute to the tens of thousands of men who built the highway. The Iron Highway Surveyor Statue stands as a ghostly reminder of the building of the Alaska Highway. The boney finger points northwest, the direction the soldiers followed to blaze the trail to build the highway. Karl Mattson, a local artist, created this amazing statue by welding and shaping scrap metal he found discarded on farms in the region.  The statue’s clothing and transit are true to the 1942 period. 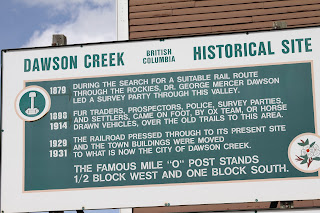 The Japanese bombing of Pearl Harbor in 1941 forced the American and Canadian governments to re-evaluate the security of North America. They needed a secure supply route to haul military goods and materials from the lower states to Alaska and it had to be completed in less than a year. The story of the men, the equipment, and their triumphs over nature to open the northern passage is as legendary as the men who risked their lives to build the highway. 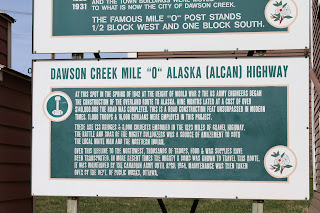 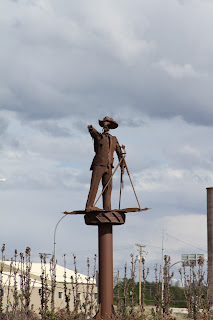 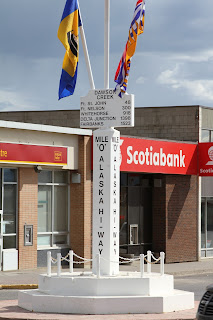 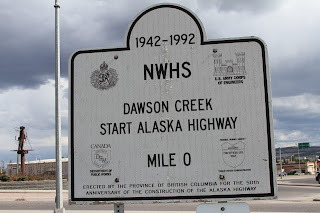 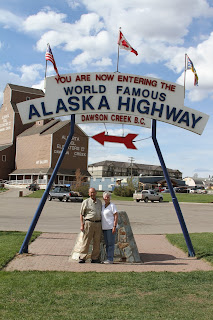 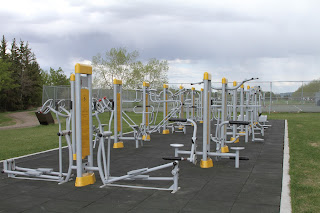 Across from where we are parked, at the church parking lot, so we can attend church in the morning, is an exercise playground.  Cindy thought it was a good idea and should be everywhere. Adults and children can exercise. 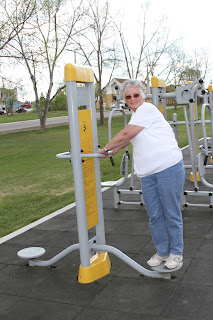 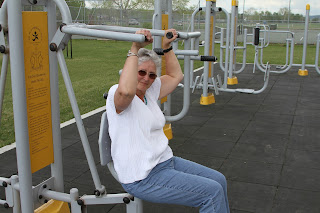 Thanks for visiting.
Posted by Ray and Cindy Warner at 6:51 PM