It was a nice day today but the predicted rain hit last night. We saw the county we are in on TV with severe thunder showers warnings. It rained most of the night although I didn’t feel the wind.

This morning as we went through the Park there were lots of limbs down and close to us a tree had fallen and was blocking the road. There was a crew working on cutting it up and opening the road.

We have seen lots of deer in the open place behind us. I tried to take a picture of them last evening but the camera lens fogged up so quickly that I wasn’t able to get a clear picture.

We went for a drive in the country side and found a few places that were worth a picture. One was a barn with a large quilt block on the side. Cindy liked the field of corn and how it looked with the barn in the background. 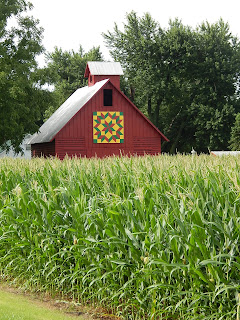 Another picture we took was of an old silo that had been remodeled into part of a home. It made for an interesting picture. 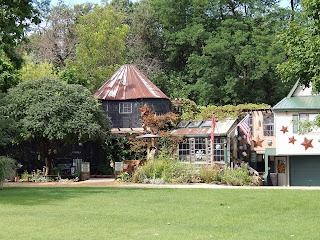 One lot in this Park had a lot of logs with smiley faces on the end. We thought someone was very creative. 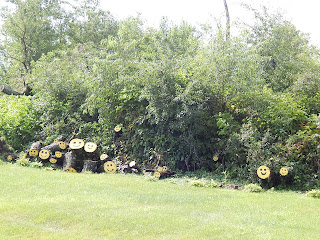 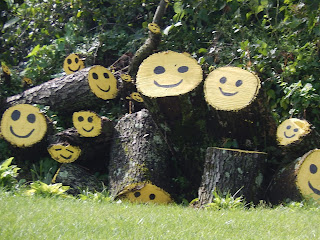 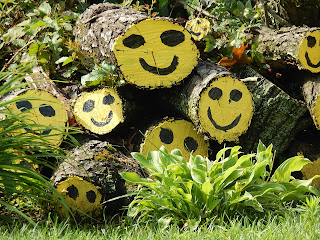 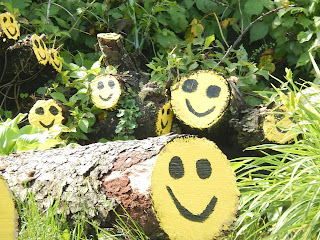 We went over to see Linda and my Mother-in-law at their lot. They are in the same Park we are in. My GPS said that they were 1.2 miles from us (as the crow fly’s) but 2.1 miles if the crow has to drive there in our truck. I believe this is probably almost the biggest RV Park we have stayed in with the exception of one in Texas. In it we were 5 miles from the entrance and it went on for a lot further.

Thanks for visiting.
Posted by Ray and Cindy Warner at 5:53 PM