Yesterday we drove from Des Moines, Iowa to Grand Island. The day was hot! It got up to 95 degrees and with the humidity it felt like 112 (this came from TV). The Interstate in Iowa was one of the roughest I have driven on. Whoever built it sure failed smooth highway building 101. After we got to Nebraska the highway improved but still was a bit rough.

We drove to Grand Island and stayed at the Hall County RV Park. It is $20.00 for an electric only site but it sure is a nice Park. There are only 19 sites but all are concrete with lots of space between sites. We got to see some wild turkeys as we drove in and Cindy managed to get a picture of them later. Sorry the picture didn't turn out too good because she was shooting into the sun and the turkeys were going into the woods. 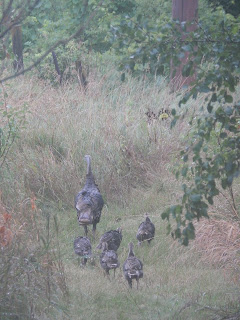 Today we drove to Sidney and are staying at Cabela's RV Park. This Park has 27 Pull through sites and 4 back in sites with full hook-ups including cable. They also have some electric only sites. The Wi-Fi even works in our RV. The normal charge is $30.00 but if you apply for a Cabela's VISA they give you a free night. The only thing if you plan on staying here, get here early in the day. They don't take reservations And right now it is 6:00 PM and the Park is almost full. 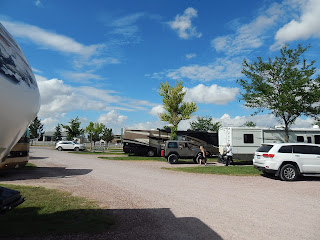 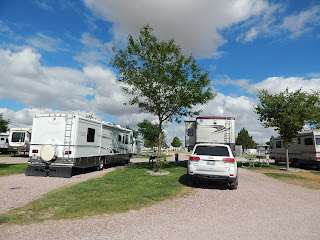 We had a scare this afternoon after we got set up. Linda came over and told us the their Mom had really low blood oxygen. I suggested she try the oxygen bottle instead of the machine but that didn't seem to help. So she called 911 and they sent out the para-medics and they checked things out. At first nothing seemed to help so they put her on a CPAP machine and the oxygen number returned to normal. The technician called The ER and they suggested bring her in and checking her over so that's what they did. Linda called from the Hospital and told us they weren't going to keep her because she seemed to be OK. So right now the plan is to continue toward home.

We will be in Wyoming tomorrow.

Thanks for visiting.
Posted by Ray and Cindy Warner at 4:45 PM