We Have Still Been Busy

It has been a lot cooler for a few days than is usual. It went from record highs to abnormal lows. It is supposed to warm up by the end of the week.

About the middle of April, I went to see a dermatologist to see about some spots on my face and head. I ended up getting half a dozen spots frozen off which I was told were pre-melanoma, so it was good that I went. The dermatologist told me that I needed to start wearing a hat outside that would protect my ears and the top of my head.

Last January before we went to Yuma, I fell on the ice and landed on my shoulder. It didn't seem to get much better, so I finally went to see a doctor about it and ended up getting some cortisone shots, which seem to be a large improvement so far.

Cindy has been busy getting the yard ready to plant, but so far it has been a little cool to plant some of the plants. She has a lot of them in containers inside and will plant them as soon as it warms up.

She also has been busy making more quilts for me to quilt. She tells me that I need to stay busy.

In between Doctors visits and quilting, I had to work on our fifth wheel. When we were coming back from Yuma with it last summer, the brakes quit working so we drove more than half way home without trailer brakes. I finally decided to fix them. It took almost a quart of brake fluid to finally get a leak from the cover on the bottom. I put disc brakes on it a few years ago and found that one of the brake lines had rusted enough to leak. This time I put all the lines inside the cover through a silicon hose and sealed the end with caulk where they came out of the cover, so they shouldn't rust again. Now we just need time to go somewhere with it.

I also had a roofer repair the shingles on our gazebo. I thought some had blown off, but 20 years of sun on the south side had taken it's toll and they some were just worn out. It only took one bundle of shingles to do the repair and it was good to get it fixed.

I have been busy in between doing a lot of quilting. My customer had one of her friends bring a quilt to me and says she is really happy about how it turned out. It was the first quilt she had anyone quilt for her.

Last Wednesday I went to a class on quilting a panel called Dream Big, which has 57 different patterns to quilt the panel, which doesn't count the ones for the rest of the quilt. I haven't finish the quilt, but Cindy is pleased with the way it is turning out so far.

This is the one we did in class. Cindy's is a different color. 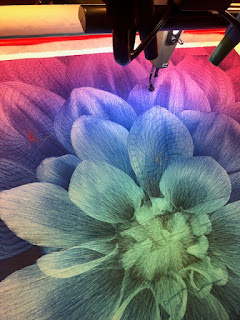 I have some pictures of some of the quilts I have finished and hope you don't get too tired of seeing them.

Cindy let me pick the patterns on this quilt and I think I found patterns that fit the blocks pretty well. 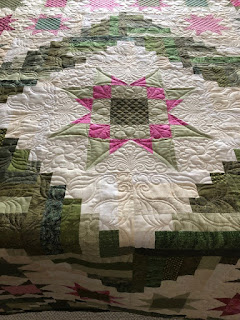 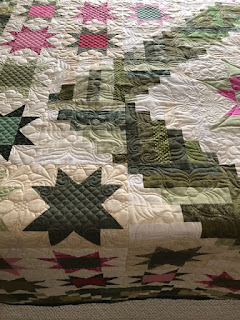 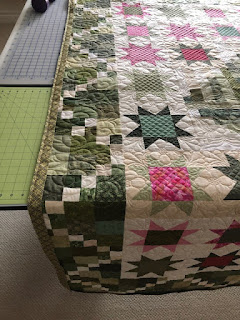 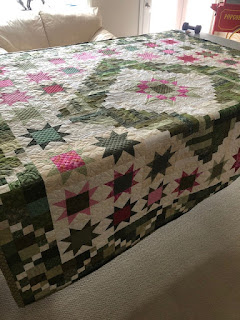 The next one I used a new, to us, border pattern that I think turned out nice. 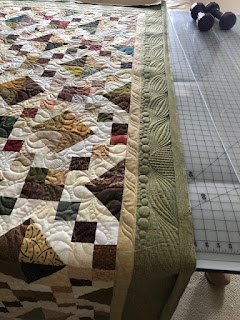 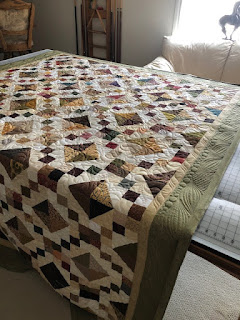 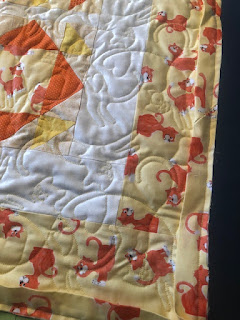 This is a baby quilt with a pattern called I Love Cats, which has cats and hearts. 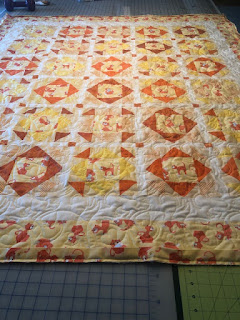 Thanks for visiting.
Posted by Ray and Cindy Warner at 5:41 PM