Wishing Everyone a Merry Christmas

Although the temperature isn't too bad, the wind blew most of the day and to us (Yes, I know we are boobs) it felt cold. I'm sure glad I'm not where it really is cold. It started raining at about 7:00 tonight and is supposed to rain until sometime in the morning. It rained a little one day last week and one of the locals told me it was a 2 inch storm, two inches between drops. It was just enough to get all the cars dirty. The rain now looks to be a little more.

We had Santa in the park and then had a pet parade. Most of the dogs were dressed up to be in Christmas costumes. Penny, on the other hand, doesn't like to be dressed up and so I carried her in her bag. The only time I put her down, she walked about 25 feet and then put on the brakes and acted afraid of the carts and so I put her back in her bag and just walked the rest of the way in the parade. 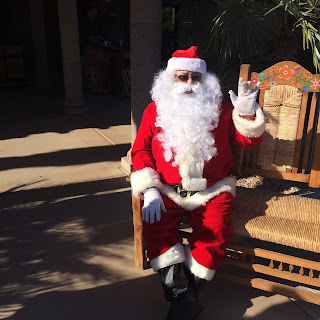 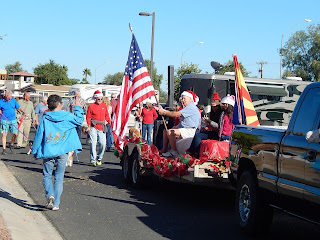 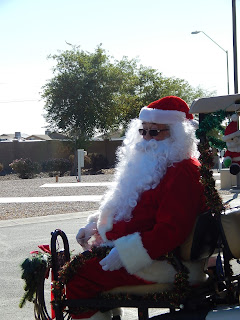 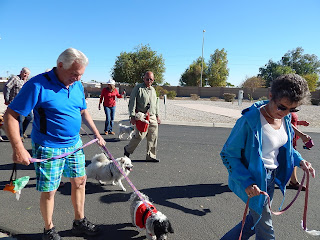 Yesterday Penny went to the groomers and got a hair cut. Now she doesn't have to look through hair to see. Everyone that saw her told me she looks smaller than before and lots cuter. I have to add that she's not very spoiled (yes she is a lot spoiled) but when she looks up at me those big eyes, I just can't resist.
Cindy has been busy making another quilt. She also spent today making Christmas cookies. We have a Christmas pot luck in the Park and she says she will probably spend Saturday getting ready for it.

I finally got all through with the dentist until March and I'm glad I don't have to go back for a while.

We got our bikes going, but I had to replace one of my tubes. When I inspected the tire, I found a large thorn in it. Hopefully there aren't any others.

The time here seems to be flying by. Probably because there is so much to do in this Park. Lately I have been able to play Shuffle board 4 mornings a week.

I take Penny to Yappy Hour most days and she has a good time running and playing with the other small dogs.

Here's wishing everyone a Merry Christmas and Happy New Year. I hope everyone get's what they want for Christmas.

Thanks for visiting.
Posted by Ray and Cindy Warner at 7:41 PM