The Simple Pleasures of Life

The temperature is more normal for this time of year, but still a little too warm in Yuma to head that way.

Wednesday we went to see Cindy's daughter and son-in-law, Stephanie and Pat, at their new home near Monticello, Utah (but not too near). They are far enough away from any grocery stores, that it has to be planned ahead of time when to go to the store.

One the way home we stopped at the small town of La Sal, Utah which is truly in the middle of nowhere. I don't know the population, but there is a post office, a small general store, which is owned and ran by a nice older lady, which has one gas pump with your choice of diesel or one grade of gas. 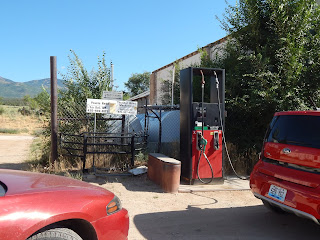 After you get to La Sal, which I reiterate is the middle of nowhere, you then drive another 45 minutes (a lot of it driving 80 MPH) to get to Pat and Stephanie's.

I took the following pictures at the rest stop after Moab, just before we turned off the main highway. 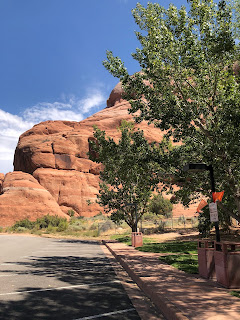 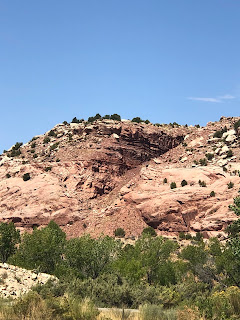 I listened to Mabel, my GPS, and she really got us lost. She had us finally go on a one lane road that was supposed to be our destination, but one side of the road went straight up and the other side straight down with nowhere to turn around. When we got turned around, Cindy was so upset  that she wasn't sure she wanted to ride in the car and was in tears. We finally got back down to the main dirt road, after going through on washed out place that Cindy was sure we would get stuck in, it was 20 miles back to the turn we should have taken. Even then, after I finally got phone service, I had to call Pat to find out how to get there. With no phone service we could have been in trouble. Cindy was afraid we were getting too low on fuel ( we really had plenty).

We finally got to their home about an hour longer than it should have taken.

They have a wonderful log home with views that seem to go on forever. 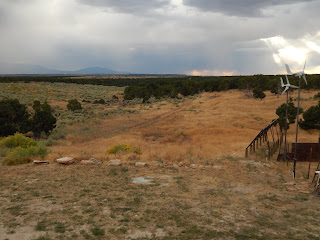 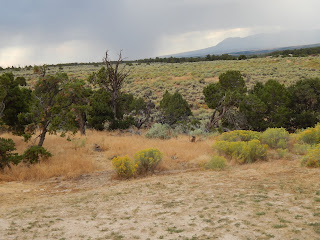 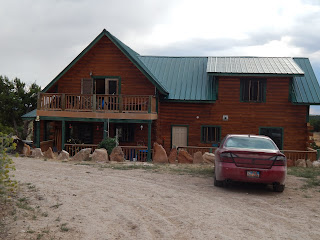 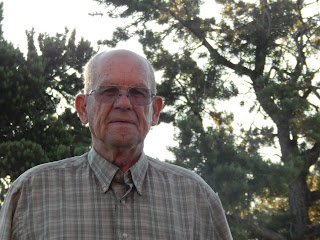 Now for the simple things that we enjoy: when we were there, the day was cloudy which meant, no solar power which meant limited electrical power. By morning the batteries didn't have enough power to operate their water pump, so no hot showers in the morning. Their water has to be hauled in and they are limited to 500 gallons per week. When we tried to brush our teeth, the water barley dripped.  No power also meant no TV, so our entertainment for the evening was to watch the humming birds feed at the feeders. 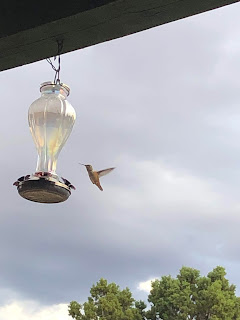 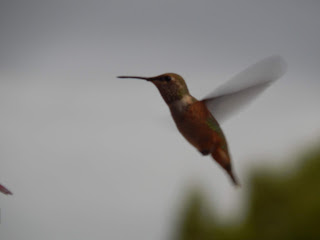 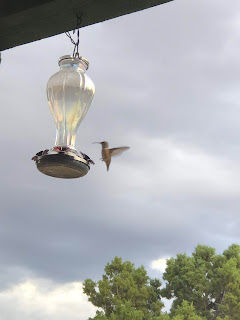 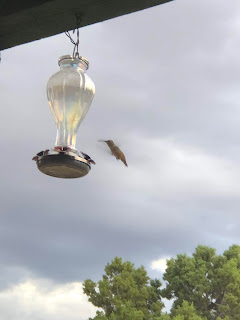 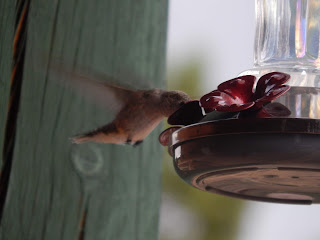 They have limited phone service and no internet. Oh for the simple joys of life. Oh, to be young. I couldn't live like that. Also, about two weeks ago. I had asked Pat about rattle snakes and he told me he hadn't seen any, but about 2 days later he had to kill one. Cindy is very afraid of snakes, so that wouldn't work out for her.

We were going to stay longer, but I had a cousin die on Monday night and wanted to get back to his funeral, so we left Thursday morning the get back to Riverton.

On the way home we stopped at a fruit stand in Green River and bought some different types of melons. The ones we have tried are sure good as was the samples of the other type we haven't tried yet.

Thanks for visiting.
Posted by Ray and Cindy Warner at 2:44 PM