Max (Penny) Was a Hit

Last night was the 15th annual Yuma Light Parade. We had to go early to check in a get in line. We were number 52 out of about 120.

We were led by a 3 wheel motor cycle carrying our banner, The Palms RV Resort Bike Brigade followed by 25 well lite up bikes and riders. 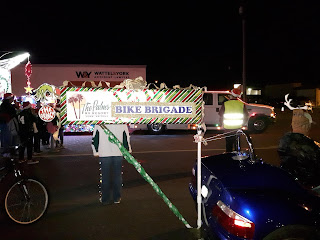 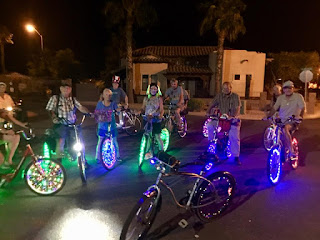 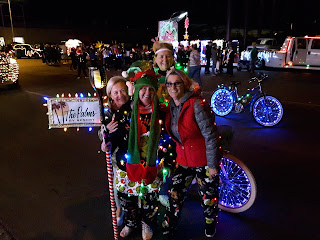 At first Tom wanted everyone to ride 3 abreast in 2 separate columns going down the road. The Parade route was down a major street in Yuma which is 4 lanes wide.

We were going so slow that some of us started to ride in circles going from side to side so most of the spectators got to see us.

Right away the kids watching the parade started to say there goes Max when Penny and I rode by so we started to make frequent stops where the kids and some adults asked if they could pet my dog. Penny is more than willing to be petted, so of course I let them. By then I would ride down one side of the road and then the other to let as many people as I had time to, see and pet Max (Penny). I told them every Grinch needed to have his dog. 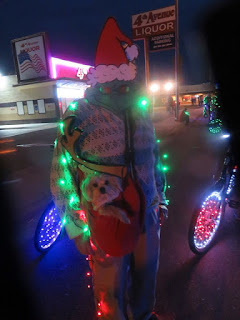 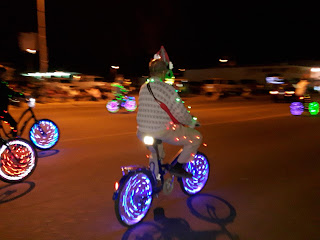 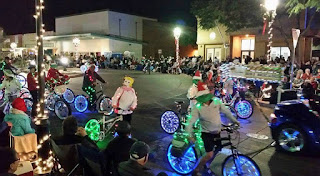 Some of the other bike riders also started shouting Merry Christmas and giving kids the high 5.

We were having a ball. It was a lot of fun for us and I hope for the spectators.

We were only able to stay in one spot until the float behind us caught up to us and more than once I got passed by the float and had to hurriedly go forward and get back into our section.

Penny had been in her Dog Bag for almost 4 hours before it was over and when she went to bed, she didn't move until morning. Last night all through the Parade she never once barked at anyone and really seemed to enjoy all the attention.

This afternoon she was ready for her normal routine of going to the small dog park for afternoon Yappy Hour. She chased one of the other dogs toy and acted like she was having fun running with some of them.

I really don't know who had more fun, me or Tom Wells, with all his antics throughout the parade. He is already talking about next year although he doesn't know the theme.

This evening Tom put on a Sunday Sundae for the Park and everyone that was in the Parade told me that they thought Penny was the star of the show.

Posted by Ray and Cindy Warner at 6:39 PM