After we left BloggerFest last Saturday we had a concert to attend at our Park. It was a tribute to Jerry Lee Lewis and other artists from that era. It was well attended and very well performed. One lady got so into the music that she danced her way to the stage and danced for the crowd for a little while. The performers had invited the group to dance to their music, but probably didn’t expect anyone to actually take them up on it. It was all good fun. 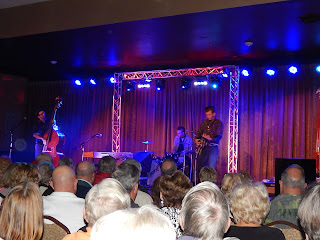 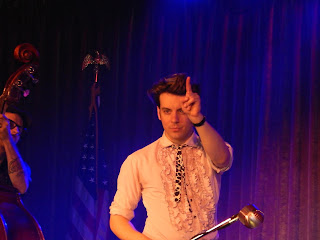 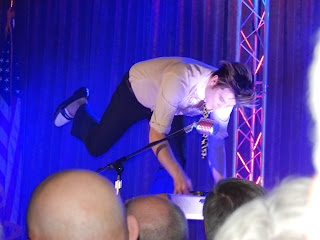 Yesterday morning I tried the shuffle boarding but am not very good, but for my first try, I don’t think I did too badly.

After shuffle boarding, one of the security guards had part of his gun collection here. It is Western week here in the Park. After looking at the guns, he and some of his friends put on a comedy skit about a shoot-out in an old western town. Some of the parts were very funny. One of the ladies said she wanted to make a parking area for wagons. It was for the roving vagabonds. She was going to call it an RV Park. The guard, who played the sheriff, told the people he would be in the saloon if they needed him, after all doughnut shops hadn’t been invented yet. 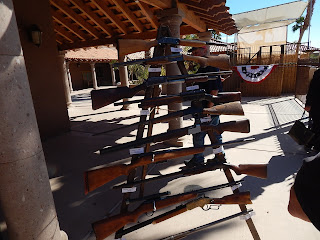 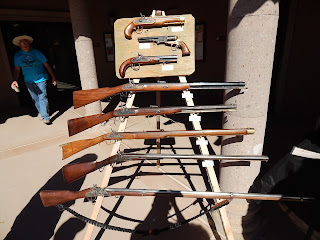 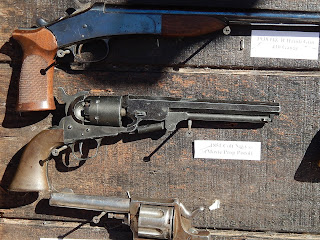 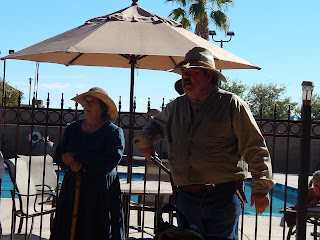 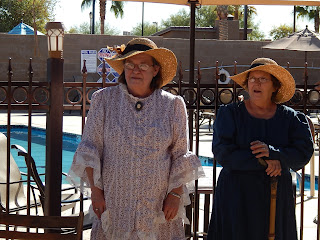 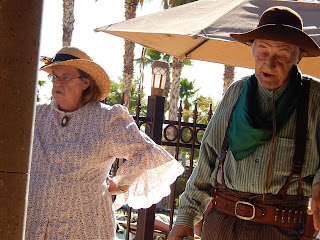 Monday afternoon we went to a presentation on The Old Plank Road. It was a wooden road built in about 1915 so cars could get across the sand dunes in California into Yuma. It was 6 miles long and was one way with very few turnouts. The Ranger told us that it took probably 2 hours to go over the road. There is only a small section left and is on the National Historic Register. There are also two sections on display in Museums.

Last night we went to the square dance lesson. It has been almost 18 years since we last square danced and I don’t remember a lot of the calls, but do remember a some of them. Cindy’s back got to bothering her and may not be able to continue the lessons.

Today Cindy went to the Pottery lesson and picked up two of her creations. She said she still has some left there ready to fire. She has also been busy sewing. I have been walking a lot since we have been here and am averaging just over 4 mile per day for the past month. For me that is pretty good.

This Park seems to have a lot going on all the time and we can stay about as busy as we want. Sometimes there is too much going on. We still haven’t been in the swimming pool but now that it is warming up we hope to soon.