Yesterday evening we went to a local restaurant for our grandson Skyler's birthday. He turned 14 yesterday. We did get pictures of him opening some presents. He is in his first year of High School. 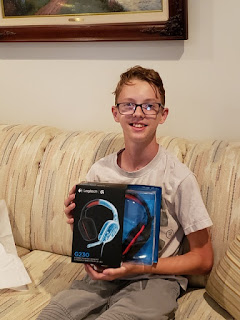 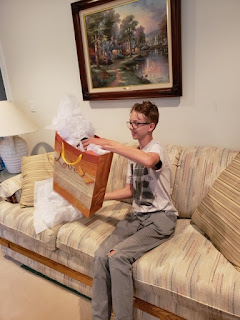 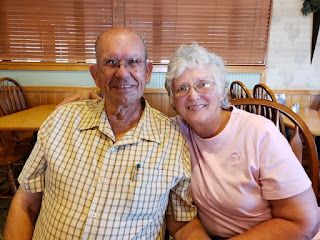 Yesterday morning I got a message that my sister Kathy, the one with leukemia, was doing worse and would I like to go see her with another of my sisters. We drove to their home and about all she did was lay in bed moaning. I'm not sure she knew we were there. Later she did sit up and drink a little water.

Then last night at about 10:00 my sister called and told me she was a lot worse and was going to her house. Then about 11:30 a text came through saying that Kathy had passed away at about 11:10.

Kathy was 63 years old and the fourth from youngest in my family. She is the third of my siblings to pass away. This makes the fourth family member to pass away in the last nine months. This sure makes me feel old. We are going to have a funeral to go to on Friday.

Today we went to see Linda, partly about our trip next spring, and partly to get a few things from her that she wanted Cindy to have that were their mother's.

Among the things was an old quilt that was hand made from some of the clothes that were their great grandfather, Joseph Moroni Turner. He was born 1881 and died in 1952. Our guess is that the quilt is at least 75 years old and shows some signs of wear. Linda wanted Cindy to repair the missing binding, but after thinking about it and talking it over, they decided not to do anything to the quilt. Some one had already replaced the binding on 2 sides. 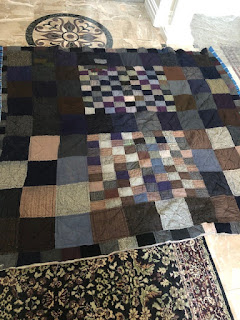 We may try to go see Stephanie tomorrow and return home on Thursday, but so far I haven't been able to talk to Stephanie. I guess the phone service isn't very good an hour from the middle of nowhere.

Thanks for visiting.
Posted by Ray and Cindy Warner at 6:31 PM