Last week was Cindy's birthday. She has had a single speed adult tricycle that was hard for her to pedal, so I got her a new 7 speed one that she seems to be doing better on for her birthday. We also went out to a Chinese restaurant.

Saturday we drove from Yuma to Phoenix to take some things to Cindy's son Scot that we had brought with us from Utah.

It was a nice day but with all the driving, I was beat by the time we got back to Yuma. We were gone for almost 11 hours, most of it driving. I don't like all the traffic in Phoenix even on Saturday.

We had a few things to see and buy while we were in the area. Our first stop after leaving Scot was Mulqueen's Fabric store in Mesa. I needed some thread for my quilt machine and I can do better there than anywhere else. Cindy needed some embroidery thread for a project she is starting, so we got it there. JoAnn's Fabric in Yuma closed their doors last March, so we really don't have a good place here in Yuma to buy thread. Yes, there is Grandma Jo's but they don't seem to carry all the varieties of thread Cindy likes. she wanted to find colors to match the material she is using.

Cindy found some quilts and a sewing bag she thinks she would like to make and I got pictures. 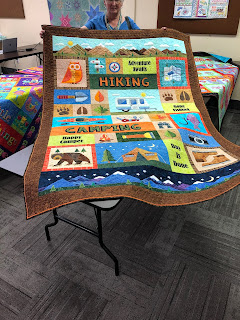 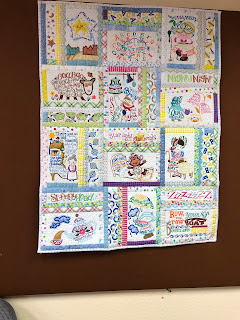 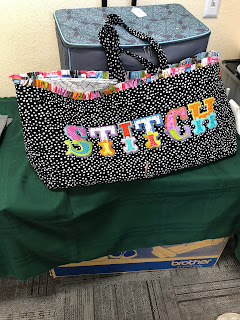 After Mulqueen's we went to Superstition Ranch Market because we like their produce (and their prices) better than the stores here in Yuma.

Cindy is working on her eighth quilt and we have only been here 3 1/2 weeks. She says a lot of the pieces were done at home in Utah, but she does stay busy sewing.

I am looking forward to when they start shuffleboard and I even had someone call me today about when we were starting. I had to tell him I really didn't know, but we could start when ever we get enough people.